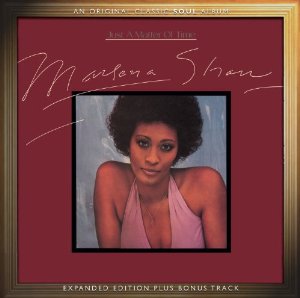 This was Ms. Shaw’s swansong for Blue Note before she jumped ship to Columbia in 1977. Helmed by Bert DeCoteaux and the Main Ingredient’s Tony Silvester, the album represented a change of direction for the New York singer who was church-reared and jazz-schooled and had sung with Count Basie’s band before eventually landing at Blue Note in 1972. Four years later, though, the singer was working on this album, her fifth LP for a company that was primarily renowned for recording jazz instrumentalists.

The album’s opener, the buoyant ‘It’s Better Than Walkin’ Out’ with its slurping hi-hat patterns finds Shaw jumping on the disco bandwagon but she adapts to her new musical surroundings with aplomb and panache. Boasting a big, anthemic chorus, dancing string lines and a throbbing dance groove, the tune was released as a single (the 12-inch single version, Blue Note’s first ever release in that format, is added as a bonus cut). Better still is the lovely Gwen Guthrie-co-written tune, ‘This Time I’ll be Sweeter,’ a song that was first recorded by the UK’s own Linda Lewis. ‘Think About Me’ struts along with a sassy funk vibe while the mid-tempo ‘You & Me’ is almost ethereal with its swirling harps. ‘Love Has Gone Away’ – a souped-up cover of a Spinners’ tune – is pure disco and ‘Take My Body’ (written by southern soul maven, Bettye Crutcher) has a sticky funk undertow.

Both of those tunes contrast acutely with the subtlety and sophistication of the Bernard Ighner-penned ‘Sing To Me,’ and the soulfulness of the singer’s plaintive take on Frederick Knight’s gospel-infused ballad, ‘Be For Real.’ The set closes with Shaw alone at the piano as she churns out a churchy foot-tapper, ‘No Hiding Place’: a great end to a solid ’70s R&B set that has only been previously available on CD in Japan.