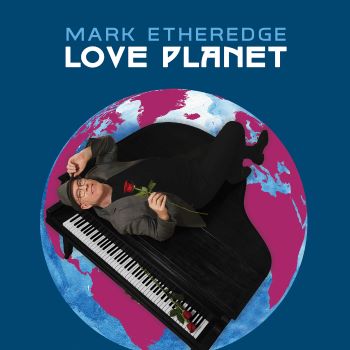 Since the release of his last album, 2016’s ‘Connected’, US jazz pianist Mark Etheredge has been on  a remarkable life journey. Tragically, he descended into alcoholism, was declared bankrupt and lost his home. Sadder though was the death of his mother who passed  away from Alzheimer’s disease. Mark is brutally honest about his problems: “I literally drank my money away”.

However, like many artists, Etheredge  found solace and a measure of salvation in music and he released two singles 2019’s ‘Resonance’ and ‘’You&Me&We’ from the following year that were well received  by the smooth jazz community. Encouraged by the reaction the keyboardist went on to record a full album  which is set for release on August 12th.

As on ‘Connected’, Paul Brown is in the producer’s chair for the 10 tracker that is ‘Love Planet’ and he also plays on a number of tracks. Indeed he’s the featured player on ‘Saucy’ the album’s big Latin moment. Pleasingly, it’s brim-full of optimism – a far cry from where Mark Etheredge must have been a few short years ago.

The album’s other “name” guests are Steve Oliver and Greg Vail. Acoustic guitar man Oliver  adds his talent to the sweet ‘Untethered’ – obvious Earl Klugh shadings. Memphis horn  man Vail takes centre stage on the soulful ‘Groove City’. The name says it all – a David Sanborn feel for sure. Vail also plays on the more gentle ‘Elated’ whose laid back and unprepossessing  tone is typical of much of the album. The album’s mid-tempo opener offers more of the same melodic balm while the set’s best late night  moment is ‘We’ll Make It Through’. The album ends poignantly with ‘Golden Hour’ – Mark’s homage to his dear mother.

Mark Etheredge will (I’m guessing) be the first to admit that he didn’t set out to change the world with ‘Love Planet’. Rather he wanted to find comfort for himself and to offer  through his music the same kind of comfort to listeners. He’s succeeded.