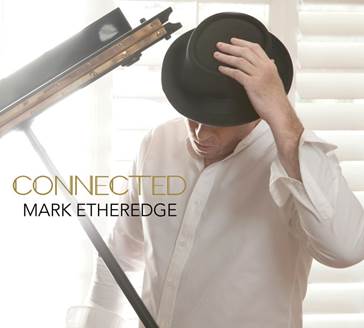 On the strength of ‘Connected’, Mark Etheredge, now based in LA, would be categorised as a smooth jazz keyboard player. However when he debuted some 7 or 8 years back he was pigeon-holed a “New Age” musician. His second album – 2102’s Change Coming’ – saw Mark switch to vocals, turning in a decent adult contemporary vocal set.

On the 10 track ‘Connected’, like we said, expect no New Age meanders or vocals… instead, if it’s your bag, enjoy some crisp, quality smooth jazz. Expect nothing here to change the world or even change your life… just buy into the optimism that Mark has tried to inject into his music. After a troubled childhood (bullying and problems with sexual identity), Mark clearly found complexities in discovering who he wanted to be… indeed what kind of music he wanted to make. Now settled, he says that he wants to make music that celebrates the optimism that comes with positive human connection.

Feel that optimism right through the ten tracks here. From the jaunty opener, ‘Groovin With My Baby’, through to the closer, the Booker T inspired ‘Soul Clap Honey’, there’s plenty to raise the spirits and nothing to make too many demands. Why, there’s even a huge dose of sunshine in the Latino-flavoured ‘Cherry Cha’.

Throughout, everything’s polished and crisp – you’d expect nothing less with Paul Brown in the producer’s chair, and there’s a unity to affairs simply because Etheredge and Brown use the same band throughout.

MARK ETHEREDGE’S ‘Connected’ will be available from February 26th