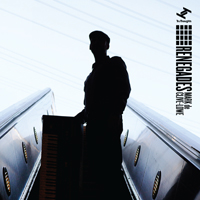 Mark De Clive-Lowe is a true music chameleon. Producer, writer, arranger, DJ, remixer and performer, his CV is mightily impressive. Though many know him for his production work and his collaborative assignments (he’s worked with people like Jill Scott and Leon Ware amongst many), he’s also recorded eight of his own albums…. and this new 14 tracker makes it nine!

Born in New Zealand of Japanese parentage, de Clive-Lowe is an accomplished jazz pianist and though there are jazz flavours here, ‘Renegades’ reflects his multifaceted approach to his music; here there’s soul, funk, tech-Afrobeat and hints of Latin too. To help him fill out his ideas he’s brought in some top names. Percussion is handled by Sheila E, Pino Palladino is the bassist while Miguel Atwood-Ferguson is the string contractor. There’s also a varied cast of vocalists – Nia Andrews, Tawiah, Sandra Nkale and Omar.

Omar features on one of the LP’s big soul cuts – ‘Get Started’, a bumpy nu/neo soul workout. ‘The Why’ with Nia Andrews on lead is smoother though the beats are tight while the same vocalist stars on the loose and leggy ‘Hooligan’. ‘Push’ is the Afrobeat focus with the closing ‘Alabi’ coming from the same root stock. Much simpler is the instrumental, ‘Just Wanna Lil More’.

These disparate cuts are held together by as series of interludes – some more experimental than others. They add to the intrigue.

‘Renegades’ will be released in November while the first single – ‘The Why’ is already available as free download. For more info go to www.markdeclivelowe.net