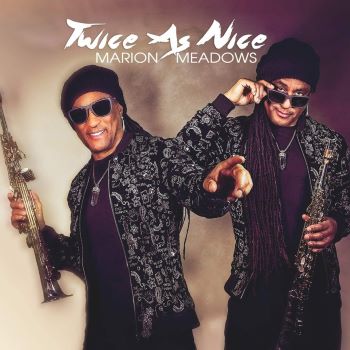 Like many creatives, smooth jazz sax man Marion Meadows has used the lockdown to good effect. He’s found the time to add to his prowess as a star photographer, an acclaimed painter and an in-demand designer. But his first love remains his music and despite the artistic diversions, he’s managed to record his 16th album as leader… ‘Twice As Nice’, just released by Shanachie.

The LP’s title track (on which the lead instrument is the flute rather than the sax), Meadows shows that he understands  what is required of players in the smooth jazz idiom – classy, melodic, groove-based with a soulful undertow, this ‘Twice As Nice’ ticks all the boxes. There’s more of the same on the opener, ‘On The Uptown’, the tight ‘Lunchbox’, the summery vibes of ‘Don’t Wait Up’ and ‘The Thrill Of The Rain’ (complete of course with obligatory rain effects) and ‘Step To This’ which when it kicks in (as the title suggests) is clearly meant for the steppers crowd – a vocal here would have created a great soul groove.

The album does offer one full vocal – ‘Yesterday Is Gone’. This is a wistful, meandering ballad with Donnelly Smallwood at the mic. The album’s other big slow movement is a cover of Bonnie Raitt’s ‘I Can’t Make You Love Me’. Always a great tune, Meadows doesn’t stray too far from the accepted template, but his sensitive playing draws out all the song’s pathos and inherent sadness.

Meadows’ standing in the smooth jazz world is such that he can call on plenty of big names to help him flesh out his ideas. Here on ‘Twice As Nice’ you can enjoy input from Paul Brown, Chris “Big Dog” Davis, Jeff Lorber, Dave Mann, Steve Oliver and Joey Sommerville. Each of ‘em steps up to the plate assisting the main man to deliver a reassuring smooth jazz collection.