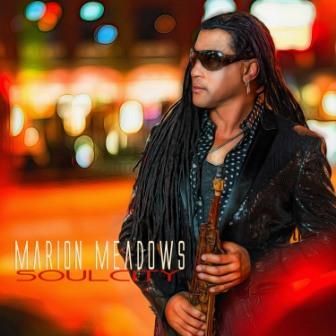 Sax man Marion Meadows has been in the business longer than even he’d care to remember and in that time he’s played with and supported many of the biggest names in smooth soul and jazz lite and for this, his latest album, some of those “names” have pitched in to help Marion deliver what is without doubt his most soulful set to date. The intention to create an album – ‘Soul City’ – built on soul grooves is announced from the start with the ten tracker’s title track. ‘Soul City’ (the track) is a solid, soulful beater that features punchy horn work from Joey Somerville and classic smooth jazz guitar courtesy of Norman Brown. There’s more of the same on ‘You’ which is driven along by Will Gaines’ insistent bass and intermittent vocals.

Speaking of which, for an album with a saxophonist’s name on the marquee, there are plenty of vocal cuts and with people like Maysa, Will Downing and Peabo Bryson taking to the mic for Meadows it’s hard to know where to start. So let’s stick with that ordering. Ms Maysa Leak fronts a Latino-flavoured ‘Dreamin”. In truth Meadows’ use of the soprano sax and guest Peter White’s acoustic guitar take the tune dangerously near the middle of the road, but anything fronted by Maysa could never be MOR! Will Downing fronts ‘Samba De Playa’ and again it’s a lighter moment but the (ad-libbed?) vocal/sax interplay is a delight. More substantial is the cover of Cyndi Lauper’s ‘Time After Time’ on which maestro Peabo Bryson shows his pedigree and class … how sad that we rarely hear him these days.

Elsewhere, Dana Lauren is a convincing voice on ‘No Wind No Rain’ while the Latrese Bush-vocalised ‘Merry Go Round’ will transport you back to the R&B grooves of the 90s. This is the unheralded album highlight and adds weight to the album’s overall titling….. ‘Soul City’ indeed!