MARILYN McCOO and BILLY DAVIS Jr; I Hope We Get To Love On Time (bbr) 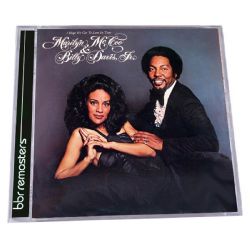 Husband and wife team, Marilyn McCoo and Billy Davis tied the knot when they were members of the Fifth Dimension and alongside Lamonte McLemore, Ron Towson and Florence LaRue they enjoyed a string of hits in the late 60s and early 70s. The hits of the Fifth Dimension were an amalgam of smooth soul and easy on the ear pop and tunes like Jimmy Webb’s ‘Up Up And Away’ and Laura Nyro’s ‘Stoned Soul Picnic’ and ‘Wedding Bell Blues’ remain AOR and smooth radio staples to this day. When the hits started to stall Marilyn and Billy quit the group to seek their fortune as a duo and they soon found success with their debut 10 tracker, ‘I Hope We Get To Love On Time’ – released on ABC Records and produced by Don Davis.

The album’s just won reissue via bbr and you’ll hear music that’s a logical extension of what the pair had achieved with the Fifth Dimension. That’s to say the soundscape is classy and sophisticated, smoothly soulful and lavishly produced. The set’s biggest hit was the instantly memorable ‘You Don’t Have To Be A Star To Be In My Show’. Ultra-catchy and convincingly sung by the pair, little wonder it went #1 on both the R&B and pop charts.

Other album highlights include the lovely ballad, ‘I Still Will Be With You’, the Tony Hester-penned dancer, ‘Never Gonna Let You Go’ and the gentle title track which hit the pop top ten in March 1976. This reissue offers the original ten tracks along with two “bonuses” – the single edit of ‘Star’ and a lilting ‘I’m So Glad I Found You’ which was the B-side to the single of ‘I Hope We Get To Love On Time’ but left off the LP.

On the strength of the album, the pair were given their own TV series and they went on to record two more albums – one more for ABC and one for Columbia and then Marilyn went solo, recording for RCA. The pair are still married an continue to tour – often as part of Fifth Dimension reunions but you can be sure they include a song or two from this set alongside the Dimension hits.