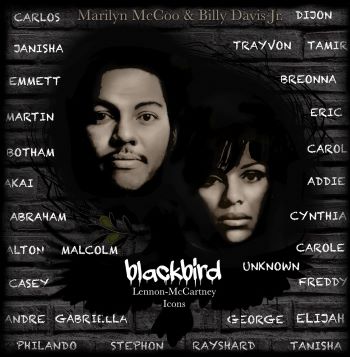 I’m sure there are statistics to prove it, but I’m confident that the Beatles’ back catalogue has been plundered more than anyone else’s. I think the very first Beatle cover was in 1963 when John Lennon and Paul McCartney gave their song ‘Misery’ to Kenny Lynch to record. Lynch was on one of those famous 60s package tours with the Fabs and it seems he got on famously with them. Since then, the Beatles’ songs have been covered thousands of times. In the 60s the Motown brigade were in the vanguard of Beatle “coverists”, plenty of soul-jazz artists took inspiration from them too, while even Otis Redding was partial to a Beatle cover. And so it went on, and on, and on! Hardly a month goes by without a new version of a Beatle tune being released. And why not? Most of their songs are remarkable creations and are always worth a fresh reading and of course, Paul McCartney, Ringo, Apple and the estates of John Lennon and George Harrison could always do with the royalties!

The latest artists to offer covers of the Beatles’ song book are multi-Grammy award-winning couple, Marilyn McCoo and Billy Davis Jr.  The co-founders of the The 5th Dimension will be releasing ‘Blackbird: Lennon-McCartney Icons’ at the end of April and, surprisingly maybe, it’s their first studio album in over 30 years. They duo say they chose the Beatles in general and the set’s ten songs in particular because the Beatles and these special songs have real resonance for them, especially in the current situation. Billy and Marilyn add that ‘Blackbird’, the song they’ve chosen as the title track is particularly important: “As black people, who began performing over sixty years ago, we have witnessed countless struggles, lost lives, broken barriers, and victories. Why ‘Blackbird’? Why now? It is a reflection of the truth we are living today. When a blackbird leaves our mother’s nest, one day, it will not return. In 2021, mothers throughout our country live in the fear that our blackbirds may prematurely not be able to return to the nest of home, because of bigotry and violence”.

Another of the album’s songs, ‘Silly Love Songs’ (A McCartney hit rather than a Beatles’ song, of course) has a more personal meaning for Billy and Marilyn. It was a big US in the same year as their ‘You Don’t Have To Be A Star’ hit #1. The other included songs are ‘Got To Get You Into My Life’, ‘The Fool On The Hill’, ‘Yesterday’, ‘Ticket To Ride’, ‘The Long And Winding Road’, ‘Help!’, (Just Like) Starting Over’ (A Lennon solo song, of course) and ‘And I Love Her’.

Produced by Nic Mendozza, the ten arrangements are sufficiently different to create plenty of interest while the vocal pairing is always a delight. Sonically, the album offers a lush, sweet pop/soul, sunshine vibe not a million miles away from the original 5th Dimension sound and always reminiscent of the duos’ great easy on the ear, ‘You Don’t Have To Be A Star’. On some of the songs the pair share the vocal spotlight while other are solo affairs. For instance, Billy’s the lead on ‘Ticket To Ride’ while Marilyn takes the spotlight on ‘Yesterday’ and the aforementioned ‘Blackbird’. But whether it’s a shared vocal or a solo effort, the pair’s empathy (for each other and for the chosen songs) shines through. Let’s hope ‘Starting Over’ is prophetic and that there’s more Marilyn McCoo and Billy Davis music on the way very soon.