MARIEA ANTOINETTE: All My Strings (Infinity/Maasai) 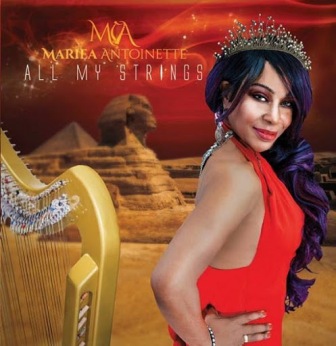 San Diego’s MARIEA ANTOINETTE is unusual amongst soul and smooth jazz instrumentalists; I’d venture to suggest unique. You see, her instrument is the harp. Ms A has a master’s degree in harp performance and has been recording since 2003 collaborating with people like Ne-Yo, Mary J Blige and Jamie Foxx…. why, she’s even played live for the Obamas. Mariea has also been principal harpist with the Los Angeles Southeast Symphony Orchestra and she tours regularly – in her own right and with the female group, Jazz In Pink. In between all that she pursues her own recording career and has just released this … ‘All My Strings’ – her third album as leader.

The new nine tracker is a little different to her previous two sets where she set out  to show that the harp could be as soulful and funky as the traditional instruments used in soul and jazz settings. Now, with ‘All My Strings’ she wants to move things a step further. The clue’s in the title. Mariea’s aim here is to create an organic sound where the focus is propelled by “vibrating strings” – the harp (of course), guitars, basses and violins, violas and cellos. To that end, on five of the tracks, she and producer Allan Phillips employ a full string ensemble … the AP Allstar Strings and their input is never less than a delight, especially on the cover of Lauryn Hill’s ‘That Thing’, which when released as a single was a Billboard hit.

The album boasts three more covers… the most surprising being the Gap Band’s ‘Yearning For Your Love’. Not an obvious choice for a harpist maybe, but the intriguing Antoinette/Phillips take really works and again that string ensemble is a revelation. Those strings are absent on the version of Minnie Riperton’s ‘Loving You’ but the result is a success even without them. It’s an obvious choice, maybe, for a harpist to cover… but it’s a great reminder of what a lovely tune it is. Smooth jazz veterans, Fattburger, offer sympathetic support. The instrumentation is minimal on the LP’s last cover – a version of Lonnie Liston Smith’s ‘Garden Of Peace’. Here we simply have Mariea’s harp and Allan Phillips’ keys creating a backdrop for the harpist to deliver a short, reflective monologue… one for the Ibizan chill out set, methinks.

The album closer, ‘Gaia’ offers more transcendence – just three minutes of soporific harp in homage to the Greek Earth deity… quite a contrast to some of the more soul-based grooves like ‘Ain’t Playin’’. Gentle and soothing or foot-tapping and head-nodding, it all seems to work. Back in the late 60s Chess/Cadet put out some great albums on what was essentially a studio group… The Soulful Strings. I can offer this album no greater recommendation than to compare it to those old, collectable Soulful Strings classics.