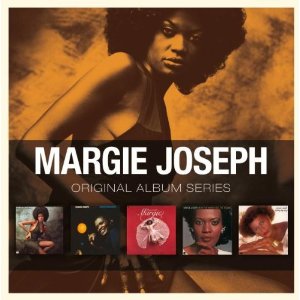 These days, Margie Joseph is solely committed to devotional music and sings only in the church. That’s where her career began, of course, back in deepest Mississippi, where she was born 60 years ago. After a deal with the Stax subsidiary, Volt – where she released two fine albums in the early ’70s (‘Margie Joseph Makes A New Impression’ and ‘Phase Two’), she landed at mighty Atlantic Records in 1973. She cut three solidly soulful albums for Atlantic (‘Margie Joseph,’ ‘Sweet Surrender,’ and ‘Margie’) then switched to the Atlantic subsidiary, Cotillion, for one album (‘Hear The Words, Feel The Feeling’) before returning to Atlantic in 1978 for the album ‘Feeling My Way.’ All the above-mentioned albums are now available in a new 5-CD set in Rhino’s ‘Original Album Series’ and for soul fans who aren’t familiar with Margie’s output, this package is highly recommended.

Despite possessing a great voice – imagine Aretha’s power crossed with Dionne Warwick’s sensitivity – Margie only scored one Top 10 US R&B hit at Atlantic (her soulful rendering of Paul McCartney and Wings’ ‘My Love’ from her ‘Sweet Surrender’ set). Given her undeniable talent, the high quality of the material she was given to work with, and the calibre of the producers she worked with – the late great Arif Mardin helmed her first three Atlantic albums, Lamont Dozier produced her ’76 Cotillion set (which contained a couple songs originally earmarked for his unreleased ‘Prophecy’ album) and Johnny Bristol masterminded the final set in this collection – she should have had more commercial success. Perhaps her sound was too close to Aretha’s for some listeners back in the day but even so, she produced some fine music.

Highlights here range from the sensual ‘Ridin’ High’ to the joyous ‘Hear The Words, Feel The Feeling,’ a great version of Johnny Bristol’s ‘Love Takes Tears,’ and arguably the best ever version of Al Green’s ‘Let’s Stay Together’ (this is a highly contentious assertion, of course, but the rhythm track featuring an amazing groove from drummer Bernard Purdie and bassist Chuck Rainey has to be heard to be believed). Collectors may mourn the lack of liner notes but despite that flaw, this set – which sells for around £12 – is a value-for-money introduction to the excellent Margie Joseph.