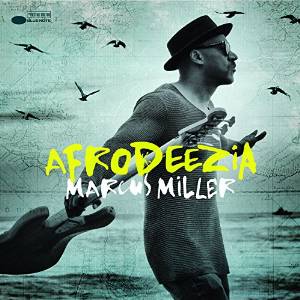 Marcus Miller’s new album is audio dynamite. As its title intimates, some of the music on this, his Blue Note debut, exudes a pronounced West African influence, exemplified by the joyous opener, ‘Hylife,’ an addictive groove which is driven by Miller’s trademark percussive bass. Inspired by Miller’s work for UNESCO (he’s the organisation’s ‘Artist For Peace’ and also the spokesperson for their ‘Slave Route Project’), ‘Afrodeezia’ is quite feasibly the 55-year-old multi-instrumentalist’s most accomplished work to date. Aided by a stellar cast – including Robert Glasper, Public Enemy’s Chuck D, Lalah Hathaway, Ambrose Akinmusire, Keb’ Mo’ and Wah Wah Watson – Miller has created ten absorbing tone poems. There are contemplative pieces as well as out-and-out- jazz-funk workouts. ‘B’s River’ is hauntingly atmospheric with its simmering African rhythms while ‘Preacher’s Kid’ is a moving piece utilizing the full-bodied harmonies of a choir. Perhaps most impressive of all is the breathtakingly beautiful and cinematic ‘I Still Believe I Hear,’ whose focal point is Ben Hong’s mournful cello. If it’s pure funk you’re after then an instrumental retooling of the Temptations’ epic Norman Whitfield-helmed psychedelic-soul sermon, ‘Papa Was A Rolling Stone,’ will hit the spot with its colossal, mesmerising groove laced with piquant jazz inflections. More contemplative is ‘Xtraordinary,’ where Miller demonstrates his lyrical side with some lissom fretless bass lines. For connoisseurs of Miller’s more percussive style of bass playing, the lively ‘Water Dancer’ will elicit nods of appreciation at his technical prowess. But, as Marcus Miller knows, technique isn’t everything: it’s feeling that really counts and this album, the versatile bass maven shows that he’s got it in abundance.