MARCUS JOHNSON; This Is How I Rock (Three Keys Music) 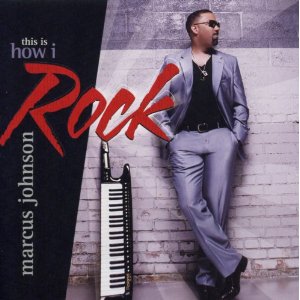 Keyboard maestro Marcus Johnson’s latest album is a bit of a departure from his norm in as much as here he delivers a long player made up entirely of cover versions – and there are few choices that might raise the odd eyebrow amongst the jazz fraternity – smooth or otherwise. Maybe the biggest surprise is a lengthy take on Nirvana’s ‘Smells Like Teen Spirit’. It begins slowly and quietly with Johnson’s clear piano outlining the basic melody line; then it builds into a rock crescendo as Stanley Cooper’s guitar slashes aggressively across the track. Don’t expect it to be featured on the playlists of Jazz FM! A little less edgy is a funky take on the Beatles’ ‘Come Together’. Johnson leads on Fender Rhodes but the bass of producer David Dyson is dominant too. The other six cuts should prove more acceptable to the radio schedulers though versions of Sly Stone’s ‘Thank You (For Letting Me Be Myself)’, Steve Miller’s ‘Fly Like An Eagle’ and Jamiroquai’s ‘Virtual Insanity’ are a decent distance from what is usually termed “smooth” or “lite” jazz. The Jay Kay song in particular is marked by some almost frantic violin from Bobby Yang. The most predictable cuts are covers of Herb Alpert’s ‘Rise’ (trumpet from Greg Adams), Hall and Oates’ ‘I Can’t Go For That’ and the old Latin war horse, ‘Mas Que Nada’. After a sparse – almost sombre start, that one takes off with the ever-welcome Maysa on chorus vocal who then goes on to scat against Rudy Gonzalez’s sax and Nehemias Iglesias’ inventive percussion. It throws new light onto something very familiar – ditto the seven other tracks.