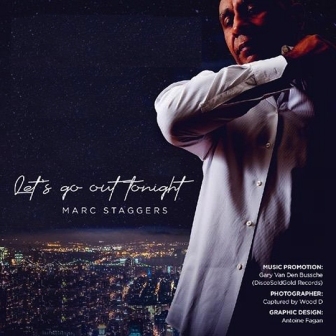 In the last few years Marc Staggers has established himself as a proper modern soul contender. If you can remember back to the early years of the new millennium, there was a wonderful soul man called Dennis Taylor. His easy going sound was everywhere and I can remember the top jocks (club and radio) vying with each other to be the first to play his new material. Well, Marc Staggers has won himself a similar status. Quite remarkable really for an artist who began working the circuit as a Luther Vandross soundalike … and yes, Marc’s sound and style is uncannily similar to Luther’s but with albums like ‘Then And Now’ and ‘Cruising’ he’s managed to establish his own credible identity. And as with Dennis Taylor back in the day, the top jocks will now be clamouring to be the first to play cuts off this, his latest long player.

‘Let’s Go Out Tonight’ is a collaborative effort between Marc and brother Reginald and both have tried to take their music to a new level and if you’ve enjoyed the two singles that have heralded this album, you’ll concur that they’ve succeeded. Both ‘I’ll Do Anything For You’ (a duet with Nia Simmons) and ‘Crazy About You Girl’ were/are fine examples of the art of modern soul. They tick all the boxes that smooth, sophisticated soul folk demand and they’re just two amongst many. On most other albums they would be cherry picked as highlights – released as early singles to tempt investigation of the full album. In truth, any of the set’s songs would have served the same purpose. So to some extent singling out tracks as “winners” is something of a redundant exercise… everyone’s a winner! Right now, though, we’re enjoying the slinky ‘If You Love Me Say It’ and the sax-led Quiet Storm moment that is ‘Bring Your Heart Back To Love’. Like everything on the LP, they’re big, full productions and yes, Marc does sound remarkably like dear old Luther but surely that’s no bad thing… what a role model for any singer!

Whatever… up top we mentioned Dennis Taylor. Not sure what happened to him… not sure anyone knows, but he’s faded and now just a name on some classy old soul. With new music like, though, Marc Staggers is far from fading. His star is shining bright and on this form it’s all set to shine for a long time yet!