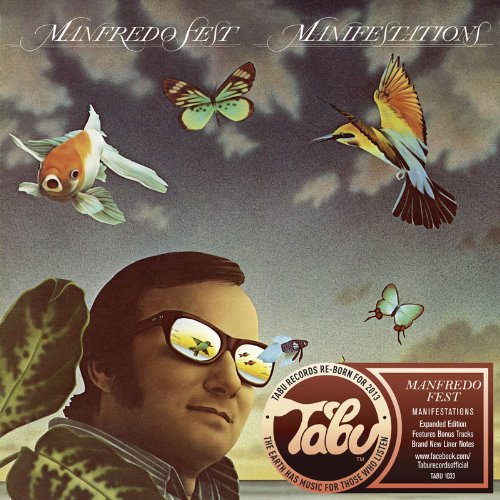 Though Clarence Avant’s Tabu label is mostly associated with soul and funk (think Brainstorm, the S.O.S. Band and Alexander O’Neal) it occasionally ventured into the realm of jazz during the late ’70s. Argentine composer/pianist Lalo Schifrin recorded a brace of albums for Tabu – ‘Gypsies’ and ‘No One Home,’ both disco-inflected, which are due for reissue soon. Another South American, blind Brazilian pianist, Manfredo Fest (1936-1999), had a one-off release for the label in ’79 in the shape of ‘Manifestations.’ That album is now available on CD in the UK and proves to be a delightful collision of jazz and funk flavours tinged with a soupçon of classical music and a liberal sprinkling of Brazilian exoticism.

The set was helmed by the redoubtable pianist/arranger Jerry Peters, who provides insightful quotes about making the album and working with Manfredo Fest in the set’s liner notes. With the help of top L.A. session players such as guitarists Lee Ritenour and Jay Graydon, bassist Abe Laboriel, percussionist Victor Feldman and horn man, Jerry Hey, Peters adds a cool, sophisticated, Hollywood sheen to Fest’s collection of Brazilian grooves and moods. The album’s killer cut is undoubtedly ‘Jungle Kitten,’ a sublime meld of disco and samba-esque jazz-funk with an addictive vocal hook sung by a bevy of background singers that includes Roberta Davis. Fading at three-and-a-half minutes, the track leaves the listener wanting more and it’s a shame that no extended mix was discovered in the archives (sadly, this reissue didn’t unearth any bonus material at all).

Another Fest composition, the atmospheric ‘Arigo,’ has a deeper, churning groove, and blends jazzy vocals with funky electric piano solos. As well as original material, Fest re-imagines Richard Rodgers ‘Slaughter On 10th Avenue’ as a Latin disco workout and includes a take on Stephen Sondheim’s haunting show ballad ‘Send In The Clowns.’ He even transmogrifies J.S. Bach’s classical music piece, ‘Prelude & Fugue #2,’ into an extended mirrorball floor filler complete with vocalese-style singing and though in lesser hands, it could have been horrendously camp and cheesy, producer Peters manages to give the arrangement some gravitas despite a four-on-the-floor pulse and slurping hi-hat patterns galore. Well worth a listen, this – especially for the glorious ‘Jungle Kitten.’