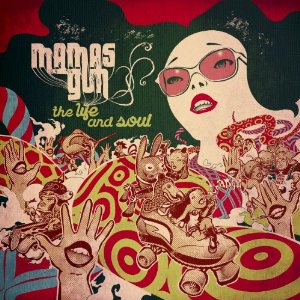 One of 2009’s best blue-eyed soul albums was Mamas Gun’s ‘Routes To Riches’. The LP boasted one of that year’s best ballads – the warm and soothing ‘Pots Of Gold’. Since then the London-based five piece have been touring hard and working on this – the crucial follow up. Produced by Andreas Olsson and Martin Terefe, the band set out to make a rockier, tougher album than ‘Routes’ and, by and large, they’ve succeeded. The intention is obvious from the start with the frantic guitar and wild vocal intro to ‘Reconnection’; then on the album’s title track there’s some hard guitar riffing on a tune that might recall some of David Bowie’s more esoteric moments. ‘Rocket To The Moon’ offers more rocky guitar while, if you’re that way inclined, you can also enjoy a cover of Queen’s ‘Bicycle Races’! What saves those cuts and ensures that others stand out is the remarkable voice of Andy Platts.

Platts is a graduate of Liverpool’s famed performing arts academy where, we’re told, he was an outstanding student – a testimonial that led him to find work with John Oates, Rod Temperton and Corinne Bailey Rae. His soulful voice was the outstanding feature of that debut album and here it still sounds convincing. Try the lead single to hear what I mean. It’s called ‘On A String’ and it’s meant to be a homage to James and Bobby Purify’s ‘I’m Your Puppet’. It sounds very different but it’s every bit as soulful. ‘Only One’ is another great soul cut. This one is a duet with the lovely Beverly Knight (watch out for her new album, by the way) and they really get it on. Best cut on the set though is the ballad ‘We Make It Look So Easy’. This is this LP’s ‘Pots Of Gold’. It oozes all the warmth and “wrap-aroundness” of that great cut and is a perfect vehicle for Platts’ wonderful voice. It’s worth checking out.