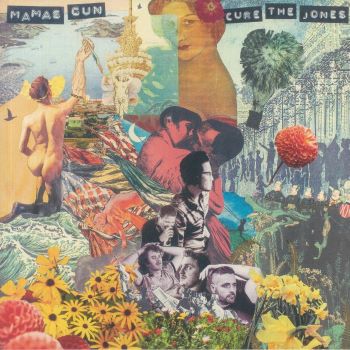 We were amongst the first media of any sort to give coverage to MAMAS GUN. It was back in 2009 (yes, 2009!) that we featured their album ‘Routes To Riches’, naming it as one of that year’s best blue-eyed soul albums. Its standout track was the sweet ballad ‘Pots Of Gold’ which still delivers with warmth and a wonderful soothing balm. We’ve followed the band closely ever since (check our interview archive) and watched as each new release saw the Andy Platts led band get better and better and more convincing in their quest to put their own contemporary spin on soul.

So, it was with more than a little excitement that we learned earlier this year that the “Gunners” had a new album in the pipeline, and that new collection is officially released today – April 1st. There has to be an Aprils Fool link – but we’re not even going there!

The album, ‘Cure The Jones’ was flagged up via  a couple of lovely singles. First the double A sided 45, ‘Party For One’/‘Looking For Moses’. The former was/is a lush, soulful meander while the latter was loose and funky with a nod to Bill Withers – the team wrote in on the day the master singer/songwriter died. Then came the soulful, harmonic and catchy mid-tempo groove ‘Good Love’ and all three of those songs sit well amongst the LP’s 11 cuts.

However, it would be wrong to call them highlights because in truth there are no highlights here! Each song is a highlight in its own right and repeated plays reveal new nuances and flavours that will delight real soul fans. If we were pushed, though, we really  do need to spotlight two masterpieces… first the opener, ‘When You Stole The Sun’. This is a magnificent soul ballad with its roots in Philly soul. There’s a hint of melancholy about it but the sound (especially on the harmonic  chorus) is joyous! Then there’s the (sightlier) jauntier ‘You’re Too Hip (For Me Baby)’. This one boasts more wonderful harmonies that hark back to the glorious era when doo-wop morphed into group soul. The track allows Platts to show off his classic, frail falsetto. That falsetto takes flight again on ‘Go Through It’ and  ‘Reconsider’ –  two more sweet ballads, while the ambience is a little more sombre on the LP’s title track and the closer, ‘Daffodils’.

Platts is superb throughout (check out his work with Young Gun Silver Fox, if you have time too) but Mamas Gun isn’t a one man band. The rest of  the team – David Oliver, Terry Lewis, Cameron Dawson and Chris Boot support admirably, especially on the harmonics. Plenty of commentators are already tipping ‘Cure The Jones’ to be nominated as one of 2022’s best albums… we won’t argue. It is good and, you know, we think you’d be a fool to ignore it. There…we just had to get that one in!