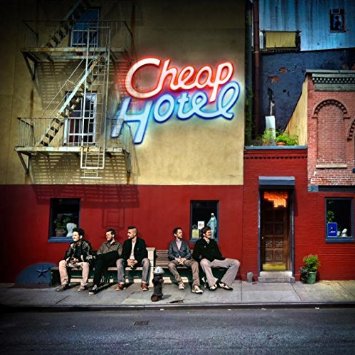 ‘Cheap Hotel’ is UK band Mama’s Gun third album. The Andy Platts-fronted outfit debuted with ‘Routes To Riches’ and its pleasing, soul-slanted pop won underground acclaim, though the set went to 3 in the Japanese album charts! The band’s second LP, ‘The Life And Soul’ was (as the name might imply) a much more soulful affair and one of the tracks, ‘Pots Of Gold’ won the affection of real soul fans world-wide. For ‘Cheap Hotel’ the band (Jack Pollitt, drums; Terry Lewis, Guitars; David Oliver, Keys; Cameron Dawson, bass; Andy Platts, guitar/vocals) have reunited with their first producer – Julian Simmons (who’s recently worked with Ed Sheeran and the Guillemots) and not surprisingly the overall sound of the set reverts back to a poppier flavour, albeit a very classy kind of pop with, yes, a touch of soul still about it.

Group leader, Platts, we’re told, has eclectic tastes. He cites Motown and funk as amongst his formative influences but he admits to a huge passion for ELO and it’s that Brummie based outfit’s sound that dominates ‘Cheap Hotel’. The track ‘Hello Goodnight’ , for instance, is straight Electric Light Orchestra- a soaring lead, surging harmonies, catchy melody and that particular phased effect which became an ELO trademark. Dip in almost anywhere here and you’ll be reminded of ELO – maybe garnished with a hint of the Beatles or the sounds of a little gentleman called Prince, but it’s almost all that slick, polished ELO pop sound… try ‘Red Cassette’ or ‘Cheap Hotel’ to hear best what I mean.

Thankfully, there are some exceptions. The loose ‘Jessie’ is the set’s funkiest cut; ‘Burn And Fade’ and ‘Midas Touch’ are affecting ballads and the quite lovely ‘On And On’ has the feel of the Eagles about it – classy country rock.

If you’re looking for real soul here, your best option is ‘People On The Run’. This one is a moody, chunky groove that has its roots in Southern soul – but channelled though the Amy Winehouse thing. It’s beguiling and intriguing…. indeed two good adjectives for the whole album. ‘Cheap Hotel’ is a great pop album with just a touch of soul about it. Sadly there’s no ‘Pots Of Gold’ here.