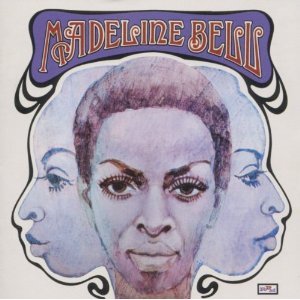 New Jersey’s Madeline Bell is one of soul’s most underrated vocalists. She came to the UK in the mid 60s as part of a gospel show and stayed to find work as a session singer. She also cut a slew of tremendous solo records but none managed to dent the charts. In the late sixties she teamed up with a group of fellow session musicians and, under the name Blue Mink, Ms. Bell did see some chart action with the annoyingly banal ‘Melting Pot’. With this new, higher profile, Madeline returned to the studio in 1970 to record her third solo set and it’s that eponymous 12 tracker that’s just won a re-release from reissue specialists RPM.

The album is a mixed bag of covers and original songs and of those originals, three had already been recorded by Blue Mink – so no surprise that ‘World’, ‘You Walked Away’ and ‘Mind Your Business’ are poppy timepieces. Much better is ‘Houses’ – a song penned by UK song smith Clive Westlake who was clearly influenced by Burt Bacharach. Of the covers Madeline does a great job on the Bread song ‘Make It With You’ but takes on The Sandpebbles’ ‘If You Didn’t Hear Me The First Time’, Van McCoy’s ‘Love Ain’t Love’ and ‘You’re The Fool’ (originally recorded by Mavis Staples) are hampered by the session band’s lack of soul feeling. Their playing is tight and professional (you’d expect that from the cream of the UK studios) but it just lacks that special magic. What saves them all are the lovely heartfelt vocals which betray their gospel roots.