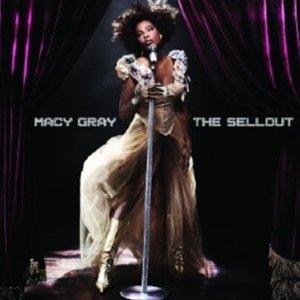 Macy Gray’s last album, ‘Big’, was a top favourite here @ www.soulandjazzandfunk.com  . Sadly it wasn’t one of her best sellers – just shows you what we know! Anyway, at the risk of putting a jinx on ‘The Sellout’ we like this one too… and (as with ‘Big’) it’s hard to say why. Apart from ‘Real Love’ no one song stands out. The CD’s stuffed with idiosyncrasies and there’s lots here that have little to do with classic soul but the set has an undoubted charm and a consistency that few new albums manage to achieve. The lead single, ‘Lately’ (not Stevie’s tune) will give you the flavour. It’s crisp and tight with a pleasing melody that perfectly suits Macy’s off-kilter vocal. There’s more of the same on the slightly lazier opener, ‘The Sellout’ and on the gentle ‘Let You Win.’ Ballad-wise, ‘Still Hurts’ is a beaut (co-written with the sadly underrated Teedra Moses). It’s a tough ballad that totally eschews the sentimentality that usually bedevils these things. Its starkness is balanced by the big “up” moments – notably ‘Kissed It’ and the ‘Batman’ inspired ‘That Man’. Both are brash and unashamedly poppy in that kind of Rhianna/ Girls Aloud way… but again THAT voice and the quirky lyrics (“He’s my brand new Ferrari, he’s my piece of cake, my personal President of the United States” from ‘That Man’) make ’em just that bit different. That brings us to ‘Real Love’… an outstanding cut by anyone’s standards and maybe the more surprising since it features a revitalised Bobby Brown. The track’s gimmick free (the spoken intro is crucial to the style) and it just has a lovely old-school feel about it. I wouldn’t be surprised to hear it featured on Radio 2… and that’s not a criticism. It’s just that you wouldn’t normally say that about a Macy Gray cut. Despite that tune’s accessibility and the album’s title, the music here is no “sell out”; Macy’s stuck to her quirky and enigmatic guns and delivered another odd collection that again manages to weave its own insistent and considerable charm.