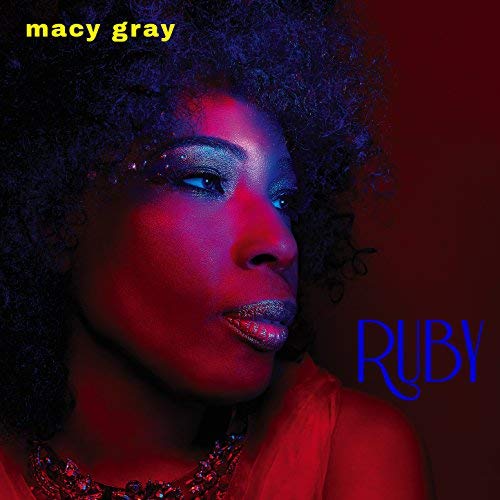 Renowned for a singing voice that resembles a husky but soulful croak, Ohio-born Macy Gray has been making music in her own inimitable way for almost twenty years now. She first broke through to the big time in 1999 with her hit debut album on Epic, ‘On How Life Is,’ which yielded her biggest single, ‘I Try’ (it reached No. 6 in the UK). Though the last decade has witnessed something of a decline in the singer’s commercial fortunes – which in no way reflects the quality of her musical output – thankfully, she’s still making good music as well as taking on the occasional acting role.

‘Ruby’ is Macy’s tenth studio album overall and also her debut for Mack Avenue’s R&B-oriented Artistry imprint. It follows in the wake of 2016’s ‘Stripped,’ a delightful one-off LP for Chesky that was recorded live in the studio and showcased the jazz side of the singer’s musical personality. Though acclaimed by the critics, it wasn’t a commercial success. ‘Ruby,’ though, may fare better, especially as its lead single, the quirky and infectious  ‘Over You,’ has already been flying high in the US R&B charts and has been getting a fair bit of airplay over  here in the UK.

Besides her distinctive, immediately recognisable, voice, Macy Gray’s often quirky and surreal lyrics also reveal that she has a unique take on life. Musically, too, she doesn’t fit conveniently into any clearly-defined category or genre, straddling soul, pop, jazz, gospel, hip-hop and even rock styles but without completely inhabiting them. Her music, in fact,  is a curious but engaging sonic amalgam that’s beyond category. She is, then, a maverick, and a delightful one at that.

On ‘Ruby’ she engages the services of three different producers – namely Johan Carlsson, Thomas Lumpkins, and Tommy Brown – but  despite this, a unified approach prevails and that makes the album feel like a coherent artistic statement.  ‘Over You’ with its big, sing-along anthem of a chorus, has justifiably been getting a lot of attention and though it’s arguably the set’s killer song, ‘Ruby’ turns out to be consistently good from start to finish.

The powerful message song, ‘White Man,’ is another highlight. Propelled by a thumping, bass-drum-heavy electro dance beat, its target is racism, which Macy takes a defiant stand against. In sharp contrast, ‘Tell Me’ is an antique jazz ballad – circa the 1920s – with a muted trumpet offering bluesy asides to Macy’s Billie Holiday-esque phrasing. Different again is a slice of chirpy pop called ‘Sugar Daddy’ and the playful ‘Jealousy’ while ‘Witness’ digs deep into a tropical reggae vibe.

Noted blues guitarist, Gary Clark Jr, contributes a stinging fretboard solo on ‘Buddha,’ another example of Macy’s ability to concoct stirring chorus lines that stubbornly lodge themselves in the grey matter. Humour has always been a feature of Macy Gray’s  work and because of that, it’s often easy to overlook that she has a serious side. An example of that is provided late on in the album by the reflective beat ballad ‘But He Loves Me,’ a poignant affirmation of love and affection, that shows a different facet of Macy’s character.

Overall, ‘Ruby’ is a satisfying album that will please Macy Gray’s long-time fans and also, with any luck, attract some new devotees as well. With its seamless and ineffable blend of musical styles combined with zany humour, wry life observations, and heartfelt sentiments, it encapsulates the mysterious and alluring essence of one of R&B’s most fascinating artists.