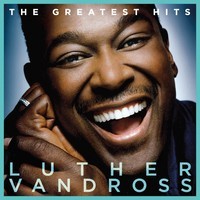 You can tell Christmas is on its way when the record companies dredge up all their old Yuletide compilations and cobble together ‘Best of..’ and ‘Greatest Hits’ sets on their biggest names. In soul music there are fewer bigger names than Luther Vandross and though there are countless compilations of the great man’s work already out there, RCA/Epic have deemed the time ripe for yet another. This time though they tell us that this new ‘Greatest Hits’ package is a little different. It contains a track that was never a hit… “great” or otherwise; indeed, said track has never been released before. Song in question is called ‘Love It Love It’ and was recorded in 1994 during the sessions for the ‘Never Let Me Go’ album. Luther co-penned it with Hubert Eaves III and soul collectors should be familiar with it via Phil Perry’s version (it’s on Phil’s ‘Pure Pleasure’ LP). This Luther version – recently “found” by long time collaborator, Fonzi Thornton – is essentially a demo. It’s a touch slower than Phil’s version and as it’s a demo, it’s a little less polished. Nevertheless, it’s a welcome addition to the Vandross canon.

For the rest… well it’s big, big Vandross tunes all the way and the compilers have sensibly covered all the bases, blending the joyous up-tempo with the lush ballads. Luther’s two signature songs – ‘Never Too Much’ and ‘A House Is Not a Home’ representing the best of the those two poles. In between you can enjoy (again) Luther classics like ‘So Amazing’, ‘Give Me The Reason’ and ‘Power Of Love’; the clever covers like ‘Always And Forever’ and ‘Ain’t No Stopping Us Now’; and the lush duets like ‘The Closer I Get To You (with Beyonce) and ‘Endless Love’ (with Mariah Carey).

All proper soul fans (never mind Luther fans) will have all the songs already but when presented like this they underline what we know anyway…. the man was a huge talent; his untimely death a huge loss. Sadly we shall never again hear a voice as perfect as his again.

Read what Luther’s long-time friend and collaborator, Fonzi Thornton says about the album in our interview feature (see “Interviews”, above).