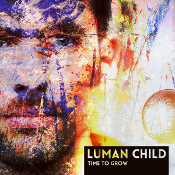 Luman Child is a Swiss (born Neuchâtel, 1984) music maker who is plays both drums and bass and he has the honour of fronting Sed Soul’s first album release of 2017… ‘Time 2 Grow’. First thing we need to say is that the sound of the 11 tracker is very different to the usual Sed Soul sound. Gone are the retro, 80s weekender flavours that Sed Soul do so well and instead we have nu/neo soul, jazzy touches and hip hop. Secondly, because of his own instrumental specialities, Luman drafts in an almost cast of thousands to help him deliver his sound, which, thirdly, is not dominated by the leader’s drums or bass playing.

So how do we define the music of Luman Child? Well there’s a lot going on. In places you’d pigeon hole the music as neo soul. ‘Hey Brother’ (Joseph Junior on vocals) for instance could be a Maxwell outtake, while the influence on ‘Was It Better’ is Ms Badu, though I’m not so sure that she’d be happy with the electro intro, intriguing though it is.

In other places I’m hearing the influence of those great old Guru ‘Jazzmatazz’ long players. Try ‘Up And Down’ with Joseph Junior and Ryan Marshall to hear what I mean. Like the Guru tracks, the rhyming is organic and gentle but pointed while the instrumentation is jazzy – hazy trumpets, understated vibes very much in the Donald Byrd/ Mizell Brothers tradition.

The Donald Byrd trumpet sound is all over this album… most notably on the instrumental, ‘Birdsong’ and ‘Time To Grow’ (which if I’m not mistaken steals a tiny sample of the Spinners’ ‘I’ll Be Around’ to get things started).

‘Life Is Like A Cloud’ is another intriguing tune. It comes in two mixes…. the original is Guru-esque while the Visioneers Remix could sit nicely on a Cafe Del Mar chill out compilation. Guess by now you’ve realised why we made the opening comments… very different for Sed Soul but never less than interesting.