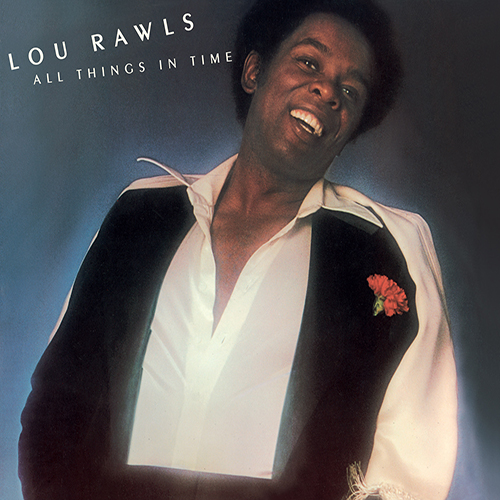 With his rich, resonant tone, Lou Rawls possessed one of the most immediately recognisable voices in soul and R&B music. Reared on a diet of church music in his native Chicago, Rawls sang in several noteworthy gospel groups in the 1950s, including the Highway QCs, where he replaced Sam Cooke, before embarking on a solo career. He enjoyed a lot of success at Capitol Records  in the mid-1960s – scoring a chart-topping R&B single in the shape of ‘Love Is A Hurtin’ Thing’ – but when he joined the roster at Kenny Gamble & Leon Huff’s Philadelphia International label in 1976, he was 41-years-old and perceived by many as a singer whose career was on the wane. But it was this album, ‘All Things In Time,’ now reissued in a limited edition replica gatefold mini-LP artwork, that kick-started his career renaissance.

The first singer on P.I.R. to have enjoyed substantial success prior to joining Gamble & Huff’s label, Rawls got off to a flying start with ‘All Things In Time,’ which is not only one of the singer’s best ever albums but also undoubtedly represented a major musical milestone for its producers and record company. Indeed, the combination of Rawls’ smoky baritone with Gamble & Huff’s silky Philly sound was a musical marriage made in soul heaven. As well as classy arrangements (many by the redoubtable Bobby Martin), the set was also distinguished by strong, top quality  material. The icing on the cake, though, was Rawls’ spectacular vocals. He had a sound that oozed class and charisma.

‘You’ll Never Find Another Love Like Mine’ is the killer cut; a chugging disco groove that explodes into life with an anthemic chorus. It’s no surprise that the song topped the US R&B charts in June 1976. Other highlights on the album  include a great take on the late Bunny Sigler’s disco groove, ‘From Now On,’ plus ‘Groovy People’ and ‘This Song Will Last Forever.’ The bluesy swinger, ‘You’re The One,’ is also a standout while Rawls shows his skill as a storytelling balladeer on ‘Time’ and ‘Need You Forever,’ the latter combining blues-inflected guitar with slick horns and strings. Rawls also serves up a mesmeric rendition of Anthony Newley and Lesley Bricusse’s ‘Pure Imagination,’ a song first heard in the movie based on Roald’s Dahl’s children’s book, Willie Wonka & The Chocolate Factory. Lou Rawls recorded six more albums for P.I.R. but as good as they were, they never quite reached the heights of ‘All Things In Time,’ which 41 years later, has lost none of its allure and potency. Timeless.