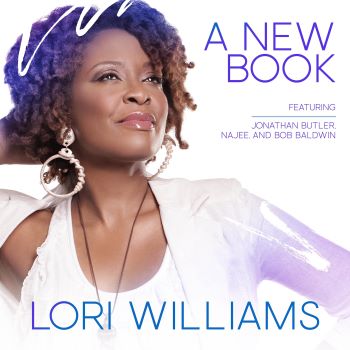 US soul and jazz songbird, LORI WILLIAMS is something of a music biz veteran with a range of skills -acclaimed vocalist, educator, songwriter, producer and musical theatre actress. And though she’s not that well known in the UK and Europe, Lori’s enjoyed considerable success Stateside. Her 2018 collection, ‘Out Of The Box’ was particularly successful and earlier this year Lori announced the imminent arrival of a new album with a delicious single, ‘New Day’. Produced by long-time collaborator, smooth jazz keyboardist Bob Baldwin, it was a sophisticated melding of smooth jazz and slinky soul that forced commentators to continue to make comparison between Ms Williams and the now seemingly inactive Anita Baker.

The promised album, ‘A New Book’, has just been released on Lori’s own label and, produced by Baldwin and with input from Najee and Jonathan Butler, it continues the trajectory that ‘Out Of The Box’ started – offering a relaxing, slick cocktail of smooth jazz and sophisticated soul that will (again) recall the very best of Anita Baker and also the similarly reclusive Sade. Those comparisons are most obvious on the LP’s title track which opens proceedings, the aforementioned ‘New Day’ and ‘Demais’ (which I think means ‘too much’ in Spanish and Ms W delivers some of the song in Spanish… I think)) ‘Firefly’ isa little sparser while ‘Ukuphila’ is different altogether. This is the track which features Jonathan Butler, so no surprise that the flavour is South African with harmonic vocal additions rather than full on lyrics… intriguing.

The albums two highlights though are two covers – highlights probably because of their familiarity. First up there’s he oft covered ‘Let’s Stay Together’ – sufficiently different to the Al Green original to provoke interest, it’s a beautifully intimate treatment. Keeping the intimacy quotient high is a take on the Eagles’ ‘I Can’t Tell You Why’. Which proves two things: first, a good song is just that – and will sound good in whatever genre it’s delivered in and, second, that working together Lori Williams and  Bob Baldwin (his keys are a total delight throughout) are a potent force in the smooth soul firmament.