LOOSE ENDS: ‘A Little Spice’ and ‘So Where Are You?’ (Soulmusic.com) 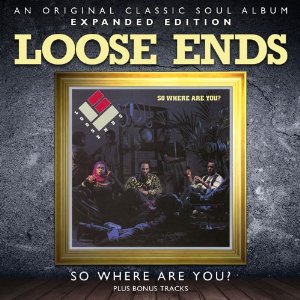 London’s Loose Ends – Jane Eugene, Carl McIntosh and Steve Nichol – were one of the first British soul acts to make a significant impact on the US R&B charts. In the mid 1980s the trio scored a succession of hits on Billboard’s R&B chart and even bagged a brace of chart topping 45s in the shape of ‘Hangin’ On A String’ and ‘Slow Down.’ Their debut album, 1984’s ‘A Little Spice’ was originally released by Richard Branson’s Virgin label and now receives its first ever reissue via David Nathan’s Soulmusic.com imprint. It showcased a distinctive transatlantic sound that melded the swagger of UK street soul with slick Philly sophistication and married traditional instrumentation with technological studio wizardry.

The set included the shimmering ballad, ‘Feel So Right Now,’ the funky electro-influenced ‘Let’s Rock,’ and the single ‘Tell Me What You Want,’ the group’s first ever UK chart entry – significantly, the reissue includes three non-album Virgin singles and their flipsides from ’82 and ’83 that preceded their first LP (‘In The Sky,’ ‘We’ve Arrived’ and ‘Don’t Hold Back Your Love’). Crucially, they help paint the full picture of the group’s formative years.

It was the group’s second album, 1985’s ‘So Where Are You’ that catapulted Loose Ends into soul music’s major league. The set’s lead single was the amazing ‘Hangin’ On A String,’ which is arguably one of the greatest songs that has been penned by a home-grown act. It was a Top 20 hit in the UK but made an even bigger impression in the USA, where its smooth, hypnotic groove, infectious vocal hook and deft Philly-style arrangement found favour. Listening to Soulmusic.com’s expanded reissue, ‘Hangin’ On A String’ still stands head and shoulders above the rest of the material on the set – but that’s not to say it’s a one-track album. It’s a very strong, cohesive opus with ‘Magic Touch,’ ‘You Can’t Stop The Rain’ and a lovely version of the Dexter Wansel classic, ‘The Sweetest Pain,’ among the standouts. The album is appended by five bonus cuts, among them remixes of ‘Hangin’ On A String,’ ‘You Can’t Stop The Rain,’ and ‘Magic Touch,’ the latter featuring Roy Ayers guesting on vibes. For serious students of Brit soul, both these reissues are highly recommended, reflecting a time when the Brits were giving the Yanks a good run for their soul money.