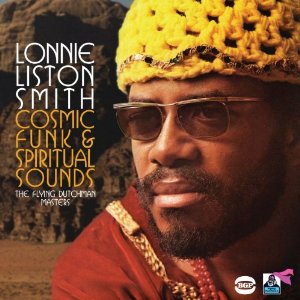 Virginia’s Lonnie Liston Smith makes a unique music. The keyboardist sounds like no one else and in that sense he’s a true jazz legend. His reputation rests on a series of albums he made for Bob Thiele’s Flying Dutchman Records in the first half of the seventies. Before that breakthrough period, Smith had put together an impressive CV as a dependable sideman. Amongst those he worked with and for were Art Blakey, Miles Davis, Gato Barbieri and Pharaoh Sanders. Like a good apprentice he learned from them all and when working with Sanders on the landmark ‘Thembi’ long player, Smith acquainted himself with the instrument that would make his name – the electric piano. In that instrument he found the flexibility and opportunities to flesh out in music his ideas and reflections on the cosmos, the nature of wisdom and knowledge, philosophy, religion and individual spirituality.

It’s unsure whether jazz entrepreneur Bob Thiele shared Lonnie’s deep thought patterns but he did like what the man was achieving with the Fender Rhodes and so he offered him a solo deal. The result was a series of albums that delivered a whole new jazz sound. Dubbed ‘Cosmic Funk’, the music had an intense spirituality and other worldliness, but at the same time it was more accessible than say the music of John Coltrane and Pharaoh Sanders – both musical seekers of spirituality.

Here Ace’s BGP imprint have collected together 15 of Lonnie Liston Smith’s best Flying Dutchman moments and just a glance at the titles give you an immediate insight onto what he was all about – ‘Astral Travelling’, ‘Meditations’, ‘Visions Of A New World’, ‘In Search Of Truth’ and so on tell you that this isn’t of necessity going to be an easy ride. The collection’s big tune is 1975’s ‘Expansions’. The 6 minute epic is a definition of the hypnotic art of Lonnie Liston Smith. With a vocal from Lonnie’s brother Donald, the tune quickly became a firm favourite on the UK jazz-funk club scene and it’s impossible to say whether the hedonistic clubbers of that golden age understood or even cared about what Smith was getting at, but what’s for sure is that the tune became an real anthem and is still capable of filling floors today. Therein lays the attraction of Lonnie Liston Smith. His work is instantly accessible – belying a depth and introspection that only repeated playing reveals. Discover more on this essential collection.