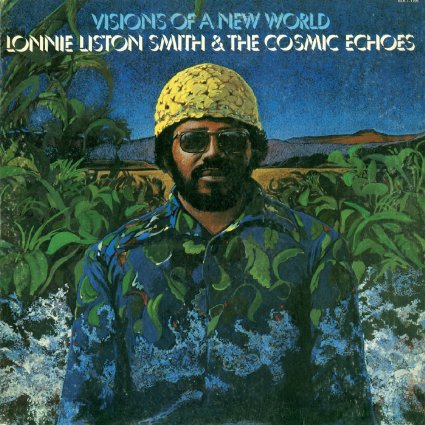 Keyboardist Lonnie Liston Smith served his apprenticeship with four hugely influential jazz masters: drummer Art Blakey (Smith played piano in Blakey’s Jazz Messengers in the mid-’60s), multi-instrumentalist, Roland Kirk (before he prefixed his name with Rahsaan), saxophonist Pharoah Sanders, and, in the early ’70s, trumpeter Miles Davis. Smith took musical elements from each of those avatars but also, crucially, found his own voice when he led his own band, The Cosmic Echoes from 1973 onwards. Fusing spiritual jazz with accessible dance rhythms, Smith patented a new sound on ‘Astral Traveling,’ his debut LP for Flying Dutchman in 1973. This BGP reissue takes us further a few years to 1975 by which time Smith’s cosmic jazz-funk sound incorporated electric pianos and synthesizers. It was the follow up LP to his third album, ‘Expansions,’ a real game-changer where Smith married meaningful messages with dance floor funk (the set’s title track is an evergreen, of course, and remains the 74-year-old keyboardist’s signature tune).

‘Visions Of A New World’ is a glistening mixture of upbeat, brassy, vocal funk – epitomised by the classic opener, ‘A Chance For Peace,’ featuring Lonnie’s younger sibling, Donald at the microphone – and mellow-vibed ballads. There are plenty of the latter, exemplified by the gentle ‘Love Beams’ and the lush ‘Colors Of The Rainbow’ with Donald Smith’s resonant voice doing a good impression of jazz warbler, Leon Thomas, on the latter title. ‘Devika (Goddess)’ is a noteworthy mid-tempo instrumental groove that features David Hubbard’s soaring soprano saxophone over a sedate but simmering backbeat. ‘Sunset’ is even mellower – a deliciously dreamy slow jam – while the two-part ‘Visions Of A New World’ begins with rumbling acoustic piano glissandi and Donald Smith’s ululating voice before morphing into a disco-friendly slice of Latin-inflected, electric piano-led groovology.

The closer, ‘Sunrise,’ restores the placid vibe of earlier tracks and concludes what was to be Smith’s final LP for Flying Dutchman. Although he recorded for RCA and then Columbia later in the ’70s, it’s true to say that Smith never quite bettered the music he recorded on the four fantastic albums for Bob Thiele’s label between 1973-1975 – and the classic and much-sampled ‘Visions Of A New World’ is undoubtedly one of the best of that particular quartet.