LOLEATTA HOLLOWAY; Loleatta/Cry To Me (Kent) 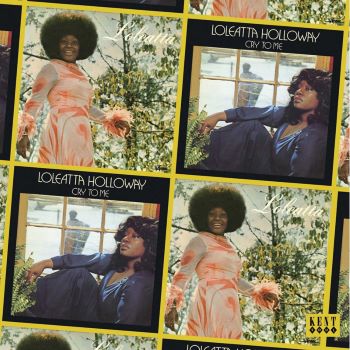 Chicago’s Loleatta Holloway is best known as a disco diva, fronting glitter ball faves like ‘Love Sensation’, ‘Hit And Run’ and ‘Dreamin’’ – most recorded with the Salsoul Orchestra. Oddly, maybe, Holloway’s biggest hits were somewhat anonymous – in as much as on ‘Good Vibrations’ her sampled vocal was credited as part of Marky Mark’s Funky Bunch while on the first incarnation of Black Box’s ‘Ride On Time’ once again it was another matter of sampling – this  time, without her and her label’s permission, leading to litigation and a re-recording of the song.

Proper soul collectors will tell you that there was much more to Loleatta Holloway than the zipping disco workouts would suggest. They’ll tell you that she began singing in the gospel churches of her native Chicago before moving into musical theatre. An encounter with Chicago record producer, Floyd Smith led to a short-lived deal with Apache Records. Then in ’72, Smith (by now married to Loleatta) scored her a deal with Atlanta’s Aware/GRC label run by a shadowy music entrepreneur, Michael Thevis. At Aware/GRC Loleatta enjoyed a couple of moderate local hits, on the back of which she cut two long players and both those albums have now been brought together on one CD by Ace’s Kent imprint and 1973’s ‘Loleatta’ and ‘75’s ‘Cry To Me’ indeed prove that there was a whole lot more to Ms H than disco dalliances.

The eponymous Aware debut was produced by Floyd Smith and arranged by Detroit stalwart Mike Terry and it’s a solid 70s soul set, mixing new tunes with well-chosen covers like the Motown chestnut ‘Love Woke Me Up This Morning’ and Tyrone Davis’ ‘Can I Change My Mind’. There are a couple of Sam Dees songs too… ‘Mother Of Shame’ (which owes a lot to ‘Love Child’) and the tortured ballad ‘So Can I’.

The ‘Cry To Me’ album was named for another Sam Dees song which when released as a single reached the US R&B top 10. Easy to hear why; with a smouldering opening monologue it marries the uptown qualities of Loleatta’s native Chicago with the passion of Atlanta and you’re never in doubt that the singer served her apprenticeship in the church.  Unsurprisingly the album features more Sam Dees songs including a wonderful version of ‘The Show Must Go On’. Loleatta tips her hat to Chicago again with a cover of the Curtis Mayfield/Gene Chandler hit ‘Just Be True’. Another highlight – a cover of Ruby Andrews’ ‘Casanova’ made ‘Cry To Me’ an excellent album – destined for great things. Sadly, just as it was released Aware/GRC collapsed as owner Thevis was jailed for his mobster connections and a wonderful soul collection was left to languish!

Holloway then decamped to Salsoul/Gold Mind to ride the disco wave to the success she’d so long deserved. Sadly, she died in 2011 (Smith died in 1984) but hopefully this reissue (which also includes four non-album cuts, three previously unissued) will help to finally establish the “disco queen” into the proper soul pantheon!