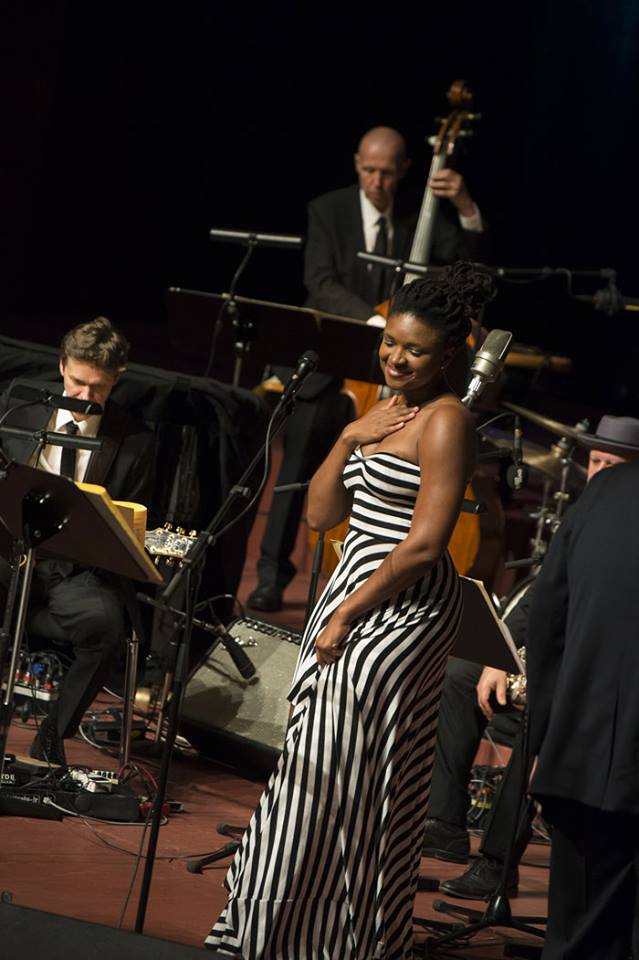 Frankfurt’s redoubtable radio big band, under the direction of noted American Grammy-winning conductor/arranger, Jim McNeely, brought a touch of old school class to the Cheltenham Jazz Festival as they accompanied Georgia-born singer, Lizz Wright (a singer/songwriter whose own music draws on folk and soul as well as jazz) on a selection of classic George Gershwin material. Opening with an orchestral overture that showed off the dynamic capability of the finely-tuned eighteen-piece ensemble – an often overlooked Gershwin instrumental called ‘Walking The Dog’ (aka ‘Promenade’) – the addition of Lizz Wright brought a touch of glamour to the proceedings. Her rich, mellow contralto – with its beautifully expressive, sonorous tone – brought a gorgeous sense of rapture to classic songs like ‘S’Wonderful’ – which was propelled by a silky bossa nova-esque rhythm –  the more mournful ‘How Long Has This Been Going On’ and a sparkling ‘Fascinating Rhythm.’ There were selections, too, from Gershwin’s famous folk opera, ‘Porgy & Bess,’ including a sublime and wonderfully imaginative interpretation of the famous lullaby, ‘Summertime.’ As well as proving what a slick ensemble they are, the Frankfurt Radio Big Band spotlighted the instrumental prowess of its individual members via numerous solo passages that punctuated Wright’s vocals. For fans of antique big band jazz, this was show was a unalloyed treat. More importantly, it also showed what a wonderfully versatile singer Lizz Wright – who eschews showy pyrotechnics in favour of a more measured, ‘less-is-more’ approach – has become.