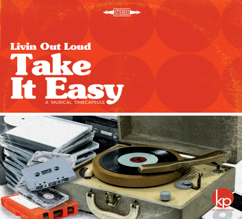 Livin’ Out Loud are an American soul group who, over the last few years, have become well known to the UK and European modern soul crowd via a number of well-crafted singles. Promo pictures from those early releases show a four piece band but it seems that now Livin’ Out Loud consist of siblings Reuben and Sylvia MacCalla and they’re the two who’ll be promoting this new album.

Discerning soul collectors will already know some of the tracks on the LP…. the shuffling ‘Cuz I Gotta Know’, the languid ‘Lately’ (no, not the Stevie tune!), a catchy ‘Always There’ (again , no… not THAT ‘Always There’) a Babyface style version of ‘You Are My Sunshine’ and the album’s title track have all been in the public domain for some time (some date back to 2010) and if you know them you’ll know what to expect from the rest of this long player – gentle, classy, polished modern soul which kind of sits between Marvin Gaye circa ‘Let’s Get It On’ (less a lot of the passion) and the aforementioned Babyface. That Babyface connection is particularly strong on a tune called ‘When Can I See You Again’ … undemanding and sweet.

The album’s big up-tempo moments are ‘Step Up’ and ‘Lookin’ For A Good Man’. That former has a Northern soul vibe running through it while the latter is much more down home. Without proper credits I’m guessing the vocalist is Sylvia MacCalla and she turns in a convincing performance. Indeed her vocals are one of the album’s attractions. Throughout, she trades leads with her brother (another credit-less guess) and between them they hone the sweet harmonies that family groups seem to specialise in.