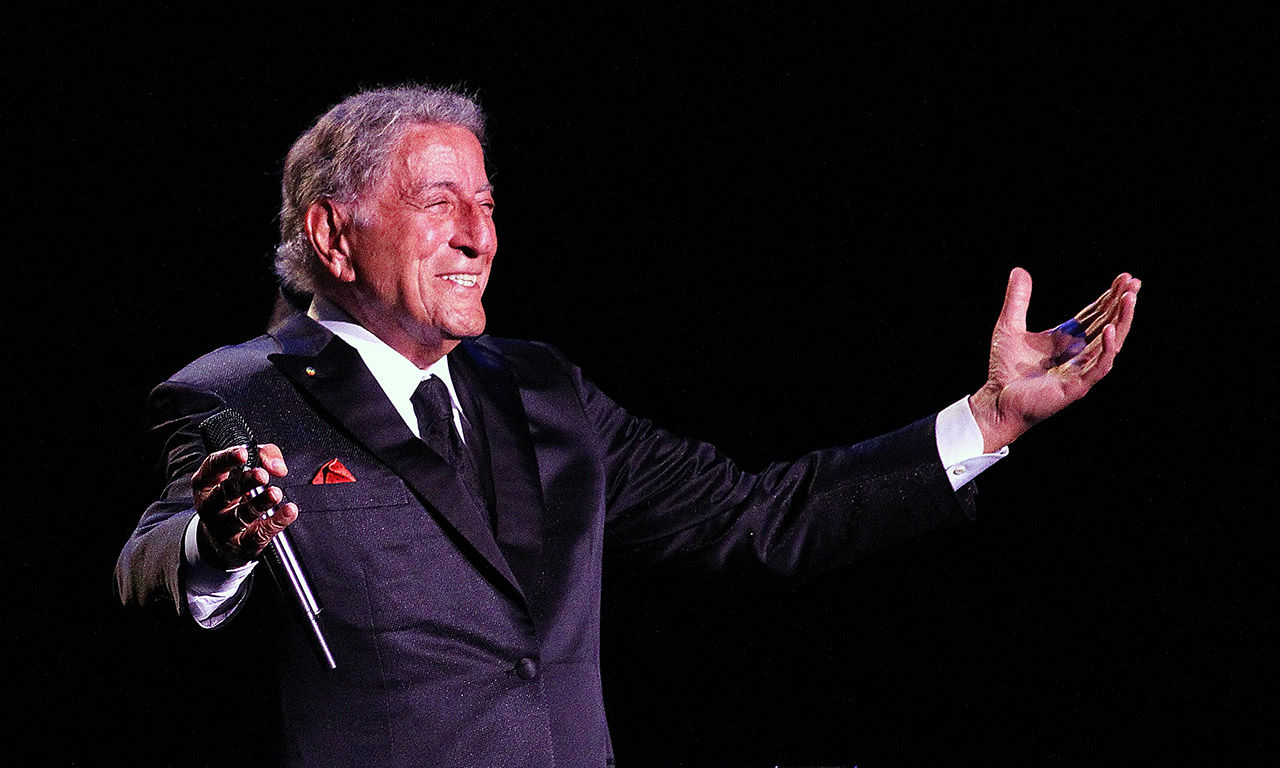 When you witness a performer getting a standing ovation before they’ve even sung a note, you know you’re in the presence of someone extra-special whose talent is transcendent – someone who’s so well-loved and respected that they can command an audience to rise as one from their seats and break out in spontaneous, rapturous applause  just by walking out on stage.  And so it was with Tony Bennett, a veritable living legend, who just a month shy of his 91st birthday, is still defying the odds by performing at the very highest level at large, sold-out concert venues around the world.

He is undoubtedly a marvel, a glowing exemplar of humanity at its best, perhaps, and judging from his memorable performance here, his elixir of life is clearly visible for all to see – it’s his passion for performing for the public, in front of his legions of adoring fans. He basks and revels in the applause and ovations he receives; his eyes closed, wearing a beatific smile with arms outstretched imploringly. Even though you’d think by now that he must have done and seen it all, Bennett never seems to tire of the wild adulation that greets him wherever he goes. It’s the fuel that keeps his inner fire burning. And as long as it keeps burning, Tony Bennett can keep going. He seems indestructible. A god among mere mortals. But then again, it’s Bennett’s human qualities – his humility, sincerity and the fact that he never takes his success or fans for granted – that has aided his popularity and elevated him above other performers in the pantheon of greats.

While he can still do what he did forty years ago and not embarrass himself, almost as remarkable as his ability to tour the world and give 90-minute performances that would sap the energy of someone half his age, is his ability to bridge the generational gap – as the audience at Symphony Hall demonstrated, Bennett appeals to a wide spectrum of people, from children to octogenarians and all ages in between. Perhaps that’s his greatest gift, bringing people together harmoniously in a dissonant, fractured world. Indeed, Tony Bennett is one of life’s reassuring certainties at a time when stability in the world is under threat.

Though Tony Bennett loves the limelight, he allowed his excellent piano-led quartet to start without him, warming-up by doing four songs before he took to the stage. But ironically, Bennett’s voice wasn’t the first one we heard – rather it was Frank Sinatra’s, via a recording broadcast over the PA system, where he famously described Tony Bennett as “the best singer in the world.” Few, of course, ever disagreed with Sinatra, and the audience here weren’t about to. In fact, over the course of the next 90 minutes, Tony Bennett not only went on to live up to Sinatra’s words but also went beyond them – I came away thinking that I had witnessed the best ever performer in the history of popular music. Of course, Bennett’s voice – once a rich, virile, Bel Canto – is not what it was but time has not been too unkind to it. Today it has a slightly husky, weathered quality – which gives it a different character altogether – but the power and intensity are still there. It’s still unequivocally the Tony Bennett of old, the Godfather of power ballads, who hasn’t lost his gift of telling a compelling story with a song. And what stories, he told. Of love, romance and hard life lessons.

He covered a lot of ground in 90 minutes, featuring 27 songs (albeit just a tiny fraction of his huge recorded canon), most of which illustrated Bennett’s gift as a peerless interpreter of the Great American Songbook.  It was a career-spanning set that included some of his earliest hits – ‘Rags To Riches’ and ‘Boulevard Of Broken Dreams’ – to imperishable classics like ‘The Good Life,’  ‘The Shadow Of Your Smile’ and his evergreen signature song, ‘I Left My Heart In San Francisco.’

When he wasn’t singing, the sprightly singer enjoyed listening to and urging on his band and occasionally danced  around the piano (he even did a pirouette of joy at one point). And that joy was infectious. He closed with ‘Fly Me To The Moon’ where he took the courageous step of singing without a microphone, allowing his innate power combined with the fine natural acoustics of the concert hall to project his voice clearly throughout the auditorium.

After that came a wave of standing ovations (I lost count after five). Then the singer became the recipient of an award bestowed on him by Symphony Hall to coincide with his tenth appearance there – he was given his own special seat and also a framed commemorative photograph of the venue (which Bennett earlier had described as “the best concert hall in the world”).

Although Tony Bennett is an endangered species and undoubtedly the last of his kind, this wasn’t the performance of someone struggling to survive in an ever-changing world that was leaving him behind. Rather, it was a glorious, life-affirming celebration of one of the greatest careers in popular music. And long may it continue.