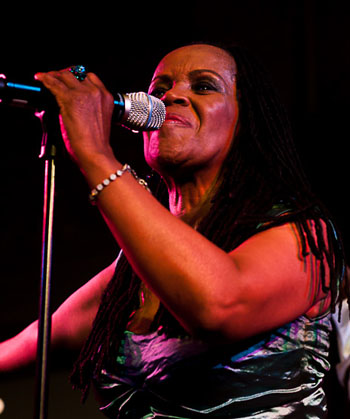 Los Angeles-born, London-based, soul siren P.P. Arnold (real name Pat Cole) is enjoying something akin to a renaissance right now on the back of the success reaped by her critically-lauded album, ‘The Turning Tide,’ a collection of previously unissued songs from the late ’60s. Both looking and sounding fabulous – can she really be 71? – P.P. was backed by a young English four-piece band (“I stole them from Steve Craddock” she laughs) and a lone background vocalist. Together, they served up an energetic performance that was warmly nostalgic and yet also looked forward to the future.

The veteran singer proved a warm, personable host, interspersing her songs with anecdotes about the career. She began by going right back to the dawn of her career with the punchy soul number, ‘What You Gonna Do,’  a song that she made her recording debut with doing background vocals on (as an Ikette) with Ike & Tina Turner soul revue. From there, the singer served up ‘River Deep Mountain High’ as a tribute to Tina Turner, of whom she said: “If it wasn’t for her, I might not be with you tonight.”  After that, P.P. explored her solo catalogue at Immediate Records by digging out classic cuts like the Northern Soul stomper ‘Everything’s Going To Be Alright,’  the driving rock-soul of  ‘Speak To Me,’ the Bee Gees’-penned ‘To Love Somebody,’ and the big tear-jerking ballad, ‘Angel Of The Morning.’ The singer also presented some of the key songs from ‘The Turning Tide’ – which was produced by Eric Clapton and Barry Gibb – including the gentle but passionate title track,  a fabulously soulful version of Traffic’s ‘Medicated Goo,’ and a souped-up rendition of the Stones’ anthem, ‘You Can’t Always Get What You Want.’

Looking forward to her new album, P.P. showcased her soulful version of ‘Different Drum,’ a song written by Monkeys’ member Mike Nesmith and which was a 1967 hit for the Stone Poneys featuring Linda Ronstadt. But undoubtedly, the biggest cheer of the night erupted at the opening piano arpeggios of ‘The First Cut Is The Deepest,’ P.P. Arnold’s anthemic signature song, which, ironically, went on to become more famous after Rod Stewart and then, later, Sheryl Crow, recorded it.

Now in her sixth decade of performing, P.P. Arnold evidently hasn’t lost her mojo yet and here, lighting up the Cheltenham Jazz Festival with a sensational concert, she proved that the old adage “age is just a number” is absolutely true.