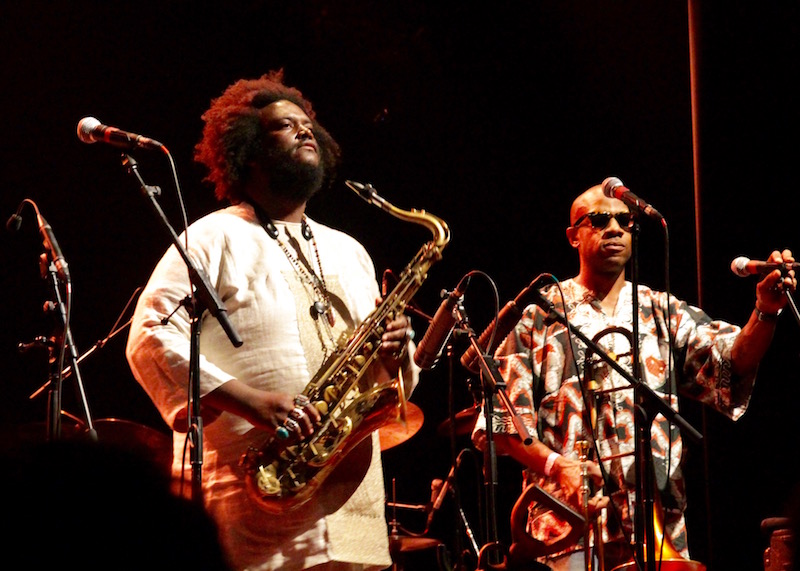 Kamasi Washington is perceived by some as the saviour of contemporary jazz, having seemingly singlehandedly altered the music’s commercial fortunes during the last three years; a situation that saw him rise from anonymous sideman to world renowned jazz superstar. Jazz in now hip and in vogue again, thanks to the hirsute, baby-faced, tenor saxophonist from Los Angeles, a benign giant whose sprawling 3-CD debut album, ‘The Epic,’ set off the music biz equivalent to a tsunami on its release in 2015. Crucially, Washington has helped to bring young people back to jazz, which is essential for the music’s survival.

Here, though, in Cheltenham, accompanied by his band, The Next Step, his coming had also attracted some more mature festival goers, intrigued, no doubt, to hear and see what all the fuss is about. Washington didn’t disappoint. After a brief fanfare, which then dissolved into momentary dissonance,  Brandon Coleman’s percussive piano announced the chords to ‘Change Of The Guard,’ a searing, frenetic modal jazz number where Washington enunciated an elegant horn melody together with trombonist Ryan Porter and flautist, Ricky Washington (the saxophonist’s father), before Coleman embarked on a wild piano solo. Underpinning the horns were Miles Mosley’s fast-walking upright bass and the propulsive double drums of Tony Austin and Robert Miller.

The saxophonist premiered a couple of new tunes from his forthcoming album, ‘Heaven & Earth’ (due for release on June 22nd). The first was ‘Fists Of Fury,’ Washington’s unique interpretation of the soundtrack theme to an old Bruce Lee-starring Kung Fu movie from 1972, with dancer, Patrice Quinn, supplying astral vocals. Ricky Washington contributed a mellifluous flute solo but it was bassist,  Miles Mosley, who really caught the ear. “He plays the upright bass unlike anyone I know on this entire planet,” said Kamasi Washington by way of introduction. He wasn’t wrong.  His solo, where Mosley initially plucked the bass strings, before bringing out a bow and using various sound effects, was incredible to both watch and hear (it’s not hard to see why Mosley is a recording artist in his own right). Equally impressive was another new tune, an elegant Washington original called ‘The Space Traveller’s Lullaby,’ which features full orchestra and choir on the new album, but was presented here in a raw, stripped-down form.

A major highlight, too, was ‘Truth,’ a blissful meditation  taken from the saxophonist’s ‘Harmony Of Difference’ EP, released last year. Introducing it, Washington said: “You hear us play five melodies at the same time and it’s a metaphor for how beautiful the world can be if we all pull together.”  Peaceful and positive vibrations flowed from Washington’s horn and it was easy to see why’s he’s become so popular in such a short space of time – not only is his music accessible but also its messages are clear. In a troubled world beset by conflict and divided by hate, his optimism gives us hope of a better world, where differences can be put aside. “Our diversity is not something to be tolerated… but to be celebrated,” he said. It was a statement that elicited a loud cheer of approval from the audience, who appeared to share his sentiments. Of course, the world’s problems cannot be solved by music, or even musicians, for that matter – though they’d do a better job than the politicians –  but his idealism is laudable, and at least he’s trying to make a difference. And I’ve no doubt that those new to Kamasi Washington will have come away from the concert enlightened by the experience of seeing and hearing him. On this evidence, his gentle charisma is hard to resist.