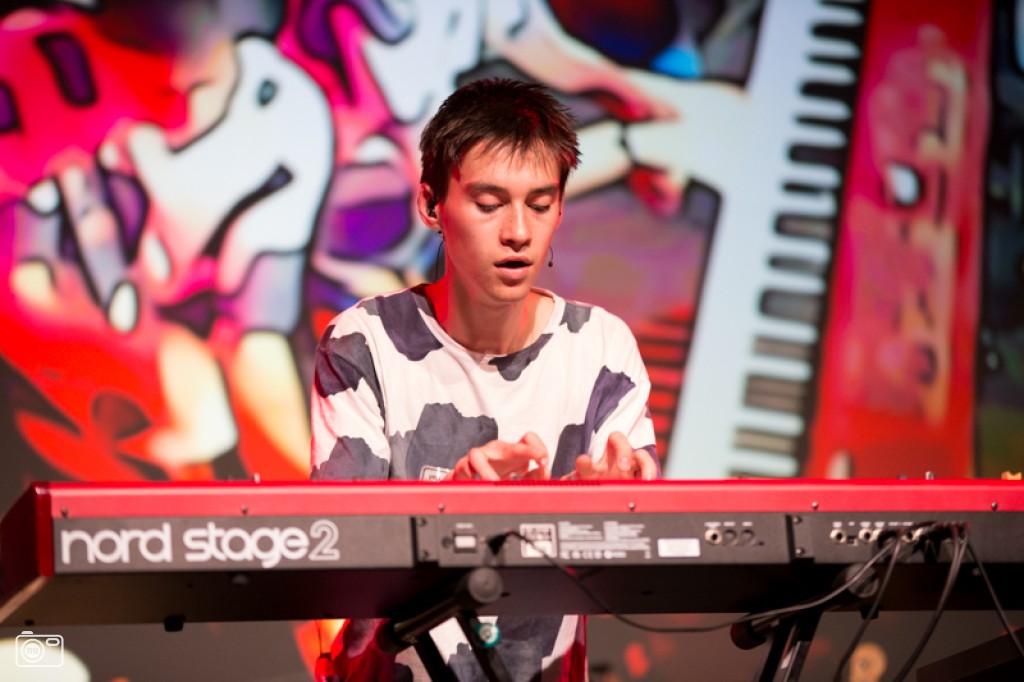 The stage was set. A double bass on the right, a full drum kit to the left, while an electronic keyboard occupied the centre stage. To the side was a grand piano, and at the back stood an electric bass and acoustic guitar with assorted percussion instruments littering the floor. But those in the audience unfamiliar with tonight’s star turn won’t see a full band walk on but just one, rather unique, individual – Jacob Collier. The truth is that this 21-year-old precociously-talented musical polymath from London doesn’t need a band – he is a band.

On stage, Collier is a musical conjuror whose box of tricks comes in the shape of an advanced sampling keyboard (a one-off co-created by a boffin friend of his at M.I.T.) which allows him to record his voice or any instrument that he chooses in real time and then loop those notes to create a textured groove. The keyboard’s ‘brain’ also controls motion-capture cameras that project images of Collier playing and singing onto a large screen at the back of the stage. As an audio-visual experience it is unparalleled in popular music. Indeed, this performance emphasised that his debut album, In My Room, doesn’t really do justice to Collier’s unique performance aesthetic. He has to be seen in the flesh to be fully appreciated.

His one-hour set ranges from dreamy, almost folk-tinged ballads to full-on funk and includes some outrageous, covers, including a mindboggling deconstruction of Steve Wonder’s Don’t You Worry Bout A Thing, whose opulent acapella jazz harmonies channel The Beach Boys and gospel-jazz group Take Six. Then Collier loops those harmonies and plays a keyboard part, looping that and moving on to other instruments to loop their parts too, all the time embellishing a constantly-evolving rhythm track. In this sense, he’s a true jazz musician because he’s creating music spontaneously in the moment. What’s remarkable, too, is the way he’s been able to harness the latest technology and create something that is jaw-droppingly sensational. But that’s not to say that technology does all the work because Collier is a virtuoso of all the instruments that he lays his hands on.

As the set progresses the sense of wonderment initially stimulated by Collier’s modus operandi gradually diminishes and it flags up a concern for how he moves forward as an artist. There’s already a heavy burden of expectation placed on his shoulders (he was introduced by the Dutch compere as the “New Messiah of Jazz”) and there are many questions that this concert left unanswered. Has he shown all he’s got or is there more to come? What does he do next and how can he sustain his audience’s interest? These are serious questions for Jacob Collier to ponder, perhaps. But for now he should just enjoy his moment in the spotlight. He deserves it.