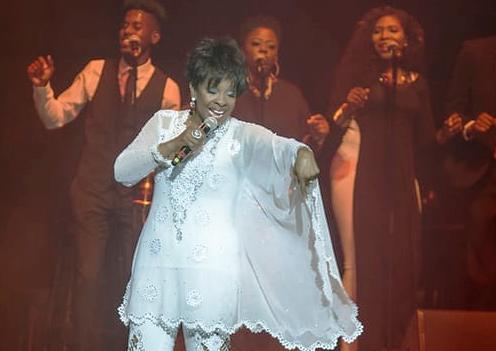 A proud and unbowed Manchester played host to the final evening of GLADYS KNIGHT’S 2017 UK tour and despite reassuring and thorough door security the evening started on time with a spirited support set from local lad, ALEXANDER STEWART. Channelling a Michael Bubblé/Bobby Darin lounge jazz thing, he mixed interesting soul covers with a trio of his own songs but the polite audience were by and large simply waiting for Ms Knight… and sadly they had to wait.

Pretty and petite in a white bejewelled trouser ensemble and flanked by two candelabra, she appeared a full half hour after the announced time but fans are a forgiving lot and as Ms. K launched into ‘Baby, Baby Don’t Waste My Time’ and ‘Bourgie, Bourgue’ all was forgiven. What followed was a consummate greatest hits set peppered with a few classy covers like Lionel Richie’s ‘Hello’, Sam Smith’s ‘Stay With Me’ and Bruno Mars’ ‘If I Was Your Man.’ That one was delivered in a clever duet sequence with the male from her BV trio and it dovetailed beautifully with ‘If I Were Your Woman’ … one of several properly spine-tingling moments of the evening. The others? Well, ‘Help Me Make It Through The Night’ (prefaced by a verse from Bonnie Raitt’s ‘I Can’t Make You Love Me’) was stunning and fully merited the standing ovation while ‘The Way We Were’ and ‘Neither One Of Us’ proved that the 73 year old Ms Knight still possesses a magnificent, emotive and truly soulful voice.

Yes, Gladys is 73 and little wonder she took time out to banter with the audience about the power of love and what she described as the mysteries of social media. She also gave time to her backing trio to come centre stage and offer a medley of Prince songs, joining them on the end piece, ‘Purple Rain’.

The it was time for the ‘Midnight Train To Georgia’ and suddenly she was gone. Clearly the engine was running and she had no time for the expected encore. Those forgiving fans didn’t mind; their heroine had delivered in spades and they went away knowing that in the soul world, pretenders may come and pretenders may go, but Gladys Knight is still “The Empress”.