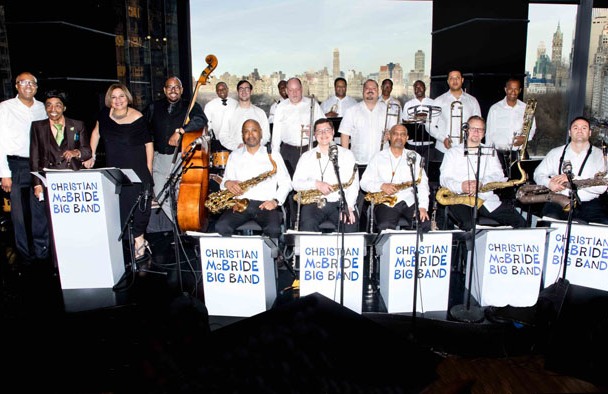 Nobody can play bass like the phenomenal Christian McBride, who brings a soulful authority to everything he performs. Though he was schooled in jazz and is deeply cognisant of its storied history and his place within it, he’s also been brought up on soul and funk and their influence can be heard and felt in the music he performs with his 18-piece big band. It’s as if the orchestras of Ray Charles, James Brown, and Duke Ellington have been brought together in one stupendous, mind-blowing ensemble.

Making what was their UK debut at Cheltenham, McBride (who was previously at the festival in 2002) and his cohorts (which included Blue Note saxophonist, Marcus Strickland, and noted trombonist, Steve Davis), kicked off with a seismic big band funk groove called ‘Getting To It,’ which took its inspiration from an old James Brown tune (‘Get It Together’) and comes across like ‘The Godfather of Soul’ on steroids. In acute contrast, the shimmering ‘Beautiful Bliss’ with its muted horns and sonorous blend of brass textures over a gently swinging groove, showed delicacy and a great tonal subtlety.  Trumpeter Brandon Lee shone on an exquisite version of the slow jazz standard, ‘I Thought About You,’ and also featured on an inspired reading of Freddie Hubbard’s hard bop classic, ‘Thermo.’ McBride’s wife, singer, Melissa Walker, then joined the band for super-soulful renditions of ‘A Taste Of Honey’ and ‘Mr Bojangles.’

But it was back to the funk – “that dirty F-word,” quipped McBride, introducing the song – for the big band’s finale, a take on the late George Duke’s ‘The Black Messiah Part 2.’ It was a slow, churning monster of a groove defined by a greasy backbeat and featuring dexterous pianist Xavier Davis.

With their meld of dynamic individual solos, crisp ensemble work, and imaginative arrangements, the Christian McBride Big Band went down spectacularly well with the Cheltenham audience. More importantly, it was a performance where McBride conclusively proved that large ensembles are still viable and have a valid place within contemporary jazz.