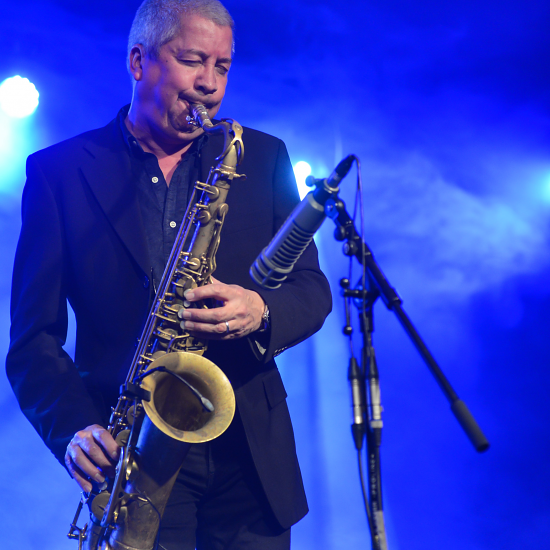 There was a time, some thirty years ago,  when tenor saxophonist Andy Sheppard was a feted young lion of British jazz’s new wave and making his presence felt in the UK pop albums chart. Those days might be long gone but this award-winning Wiltshire saxophonist, now 61, who seems to get better with age, continues to ply his trade and has been making impressive recordings for Manfred Eicher’s iconic ECM label during the last decade. Sheppard’s latest opus for the Munich-based company is the excellent ‘Romaria’ and understandably, it proved the focal point of this keenly-anticipated lunchtime concert at Cheltenham’s Town Hall venue. The same multi-national musicians that appeared on Sheppard’s new album were present here – Norwegian guitarist, Eivind Aarset; French-Algerian bassist, Michel Benita; and ubiquitous Scottish drummer (now shorn of his trademark Afro), Seb Rochford. Together, they created dreamy, ruminative soundscapes whose ethereal, ambient style epitomises the distinctive ECM sound.

A crucial component of Sheppard’s quartet is Aarset, who, though billed as a guitar player, offers so much more sonically. With his large array of stunning effects gizmos, he was like a veritable one-man guitar orchestra, creating a cinematic world of sound that imbued the music with both atmosphere and mystery. Alternating between tenor and soprano saxophone, Sheppard displayed his masterly virtuosity though his improvisations were never too ostentatious and he always seemed mindful of preserving the mood of his compositions. Subtlety, then, was key to this performance, and it was also embodied in the sublime support work of bassist  Benita and drummer Rochford, who shined as unobtrusive team players by putting the group’s needs before their own as soloists. There was a haunting lyrical beauty to ‘Romaria,’ while a sense foreboding was created by the filmic ‘They Came From The North,’ where Aarset’s atmospherics dominated.

As an encore, the quartet played a shorter piece. Sheppard introduced it by saying,  “we hope it puts you in contact with the 16-year-old body that’s trapped inside your current body,” which elicited laughter from the audience, who then got treated to an idiosyncratic version of The Beatles’ ballad, ‘And I Love Her.’ It brought the curtain down on a satisfying afternoon which had the punters queuing up to buy the saxophonist’s latest album.