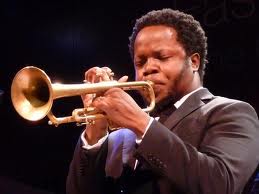 Regarded as one Blue Note’s brightest rising stars, Los Angeles trumpeter, Ambrose Akinmusire came to the Cheltenham Jazz Festival on the back of having just released his second album for the legendary jazz label – which celebrates its 75th anniversary this year – the enigmatically-titled ‘The Imagined Savior Is Far Easier To Paint.’ From that album, Akinmusire and his quartet – comprising Sam Harris on piano, Harish Raghavan on bass and the trumpeter’s long-time confrere, drummer Justin Brown – played the beautiful ‘As We Fight’ early in his set, an exploratory track that not only crystallised Akinmusire’s subtle probing of jazz’s sonic frontiers but also reflected his desire to bring something new and fresh to the jazz tradition. From the same album, the elegant ‘Vartha,’ with its mellow trumpet melody, was rendered with aplomb, showcasing the undeniable synergy of Akinmusire and his band. Indeed, the group’s ensemble work was particularly striking, with pianist Sam Harris catching the ear with his deft and intelligent contributions to the group’s sound. “I love playing with these guys,” confessed a beaming Akinmusire at one point and the onstage bond between them clearly manifested itself by the intuitive and almost seemingly telepathic nature of their musical interaction. The trumpeter introduced a brand new number, which he said had no title as yet though the band had provisionally dubbed it ‘Milky Pete.’ That too, with its purposely off-kilter meters and unusual accents, was superbly rendered – and the audience’s appreciation of what they had heard resulted in a standing ovation for the musician who is unequivocally Blue Note’s most important – and exciting – signing in years.