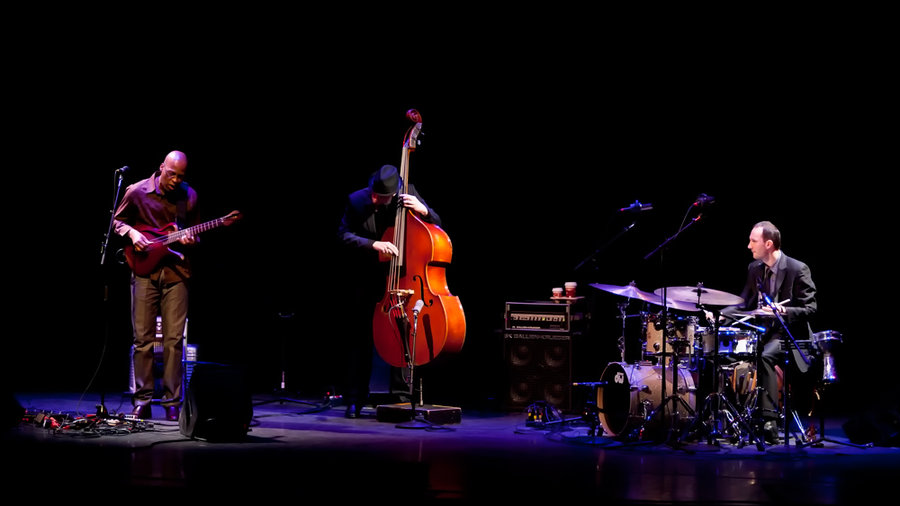 With a CV that includes sideman stints with the redoubtable Herbie Hancock, Terence Blanchard, and Jack DeJohnette, it’s safe to say that West African guitarist, Lionel Loueke, is on the radar of most serious jazz fans. With six solo albums to his name (the last four on Blue Note), he’s undoubtedly one of the rising stars on today’s jazz scene and his distinctive individual style, which melds African music with jazz and rock, definitely sets him apart from other fretboardists. Loueke debuted at Cheltenham in Herbie Hancock’s band in 2006 but today, he was back as a headliner leading his own trio that comprised Swedish-Italian bassist Massimo Biolcati and Hungarian drummer Ferenc Nemeth (“These are my brothers from another mother,” quipped Loueke, alluding to their long friendship).

Starting off low-key with the pastoral opener, the hypnotic ‘Dream’ – propelled by gentle guitar finger-picking, which he recorded with his band mates under the collective name Gilfema in 2005 – Loueke and his cohorts then got into their stride with a lengthy reading of ‘Broken,’ a searing jazz-rock piece featuring Loueke on guitar synth, followed by ‘Veuve Malienee’ which began with an eloquent bass solo from the dexterous Biolcati before Loueke’s clipped, percussion guitar took it in another direction. Indeed, Loueke’s music is hard to pin down – a mesh of different flavours with a palpable African overtone, it belongs in a category all by itself. “Leaving the comfort zone, that is what we do,” remarked the guitarist, describing his music, and it proved an apposite statement. The trio certainly pushed the envelope with their unique and intrepid fusion of styles and while, perhaps, it wasn’t everyone’s proverbial cup of tea, for this writer the band’s almost telepathic interaction with each other proved compelling and left me craving more. If you have the opportunity to see Lionel Loueke and his band live, I urge to do so – he’s in a league of his own.