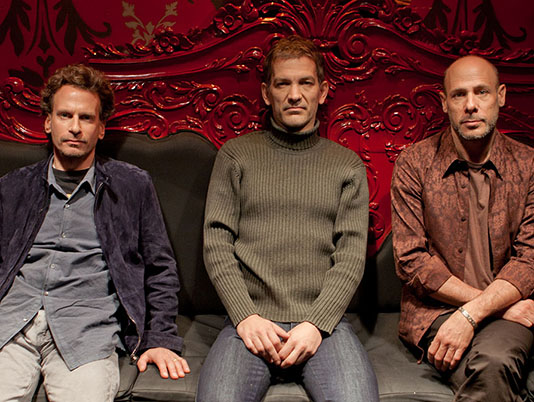 There are those who view Brad Mehldau as the direct musical descendent of fellow pianists Bill Evans and Keith Jarrett. That’s not surprising, perhaps, and totally understandable, given that both of those illustrious musicians, like Mehldau, were profoundly influenced by classical music, favoured a densely harmonic, lyrical style and played a major role in plotting the trajectory of the piano trio in the post-bop era. What makes Mehldau different is not solely his propensity to include pop and rock songs in his repertoire – in terms of cover versions, his set list is just as likely to include Radiohead, Oasis and Beatles’ tunes as traditional jazz standards – but also his unique contrapuntal approach. Mehldau has developed a technique where he uses his left hand almost as much as his right to craft melodies, motifs, and solos. An orthodox jazz pianist will mostly use his or her left hand to play supporting chords and harmonies while the right takes the lead role but for Mehldau, both hands have an equal say in creating the music and often a ornate, almost quasi-baroque, tapestry of sounds and tone colours results.

The best way to appreciate Brad Mehldau’s technical brilliance is in a live setting and so this concert as part of the 2017 Bath Festival with his celebrated trio – the long-serving and peerless Larry Grenadier on bass and swashbuckling Jeff Ballard on drums – offered an ideal opportunity to witness the man in action. But to focus solely on Mehldau’s technical accomplishments is to blind yourself to another of his gifts – his sensitivity. Indeed, he achieves the perfect equilibrium between ‘chops’ and feeling; between his virtuosic manual dexterity and keen emotional intelligence. To have one of these gifts is  to be armed with a potent weapon but to possess both, as Mehldau does, is very special indeed. But singling out Mehldau is to miss the point of the trio – it is, after all, three people playing and each makes his own singular contribution. In the 1960s, Bill Evans introduced a piano trio where a more democratic approach was taken, allowing the bassist and drummer to be regarded as more than mere accompanists and contribute to music in pro-actively creative way. Mehldau has always adhered to the same principle and allows Grenadier and Ballard to express themselves fully within the music. Indeed, the three have achieved a telepathic level of understanding in the way they interact and communicate with each other on stage.

They began with two new and unfamiliar numbers. The first, ‘Gentle John,’ is a homage to guitarist, John Scofield, with whom Mehldau worked last summer, and the second, as yet untitled, was more pugnacious and built upon a dynamic Jeff Ballard drum groove. Those two tunes showed the trio in full-throttle mode but the next one, ‘Wolfgang’s Waltz,’ was a delicate ballad in 3/4 time that the pianist had originally recorded with Austrian guitarist, Wolfgang Muthspiel, on last year’s ECM album, ‘Rising Grace.’ That particular song highlighted the symbiotic nature of the trio’s interaction, which reached an even higher peak of expression on a superlative rendering of Lennon & McCartney’s ‘And I Love Her,’ one of the highlights of their recent ‘Blues & Ballads’ LP on Nonesuch. It showed that while Grenadier and Ballard function as a reliable rhythmic engine room, their contributions also evince subtlety as well as power, allowing Mehldau the freedom to roam and sculpt elaborate melodic filigrees with an ingeniousness that provoked wonder.

But ultimately, the concert wasn’t just about one man – rather, it emphasized the ‘all-for-one, one-for-all’ ethos of the American pianist’s trio. It was a vivid demonstration of what happens when three super-talented jazz musicians unite in thought and purpose, producing music of an extraordinarily high, transcendent, quality.  This was, then, a concert to savour.