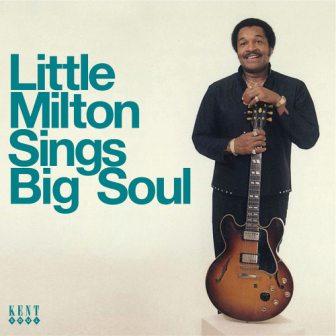 Little Milton is the soul mans soul man. Little known in the mainstream, he’s rightly revered by connoisseurs of the genre who tracked James Milton Campbell’s career from his blues roots, through his years of prominence at Chess, his stint at Stax and onto his later recordings at Malaco where he would regularly return to his early blues roots.

Amongst Little Milton’s classic albums at Chess is 1966’s ‘Little Milton Sings Big Blues’ and in homage to that collectable collection, Kent records have just issued this wonderful new 18 tracker that collects the best of the soul sides he recorded at Malaco in the 80s. Interestingly this project focuses on Milton’s version of other artists’ songs and there is much to treasure here as the singer/guitarist re-interprets material made famous by artists like O V Wright, Bobby Womack, Johnnie Taylor, King Floyd and Brook Benton. The Benton song is one of the collection’s highlights. It’s a fabulous version of ‘Rainy Night In Georgia’ –always a great song, this version, of course, is essentially a cover of a cover (Brook Benton scoring the big hit with the Tony Joe White Song).

A cover of Dorothy Moore’s ‘Misty Blue’ is another album highlight while a re-recording of his own ‘We Gonna Make It’ stands out too. With other songs from the pens of people like George Jackson, Frederick Knight and Philip Mitchell you’ll understand right away why we’re talking real soul quality soul here.

Little Milton died in 2005 leaving a sizeable back catalogue that has been sadly neglected by the reissue specialists. If you’re unfamiliar with his work, this collection is a great introduction to a soul man, who despite his name tag was a giant of the genre. If you do know his work, it’s odds on you’ll love everything here.