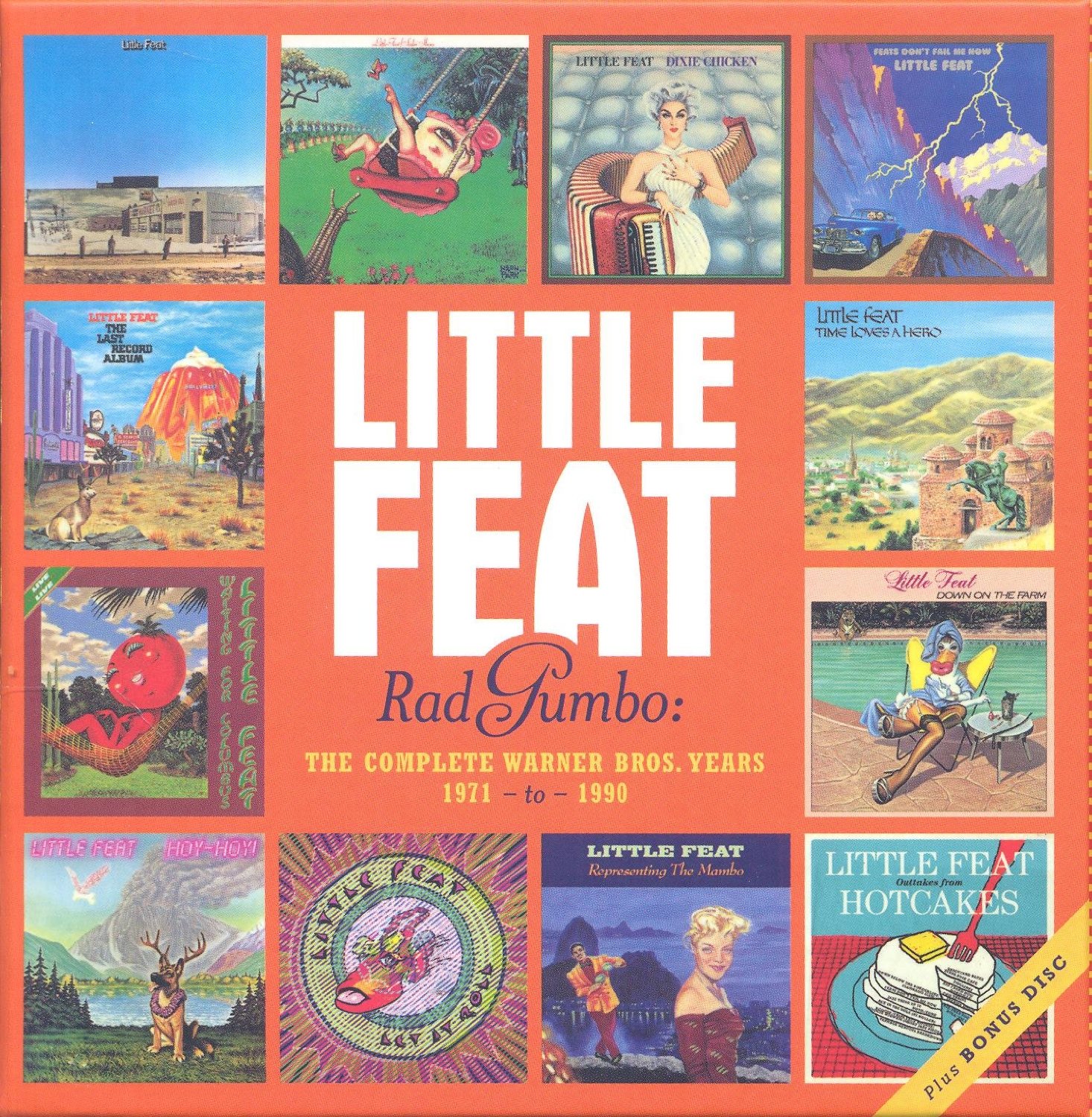 Back in the mid-1970s – just before the advent of punk rock and an all-engulfing New Wave tsunami that caused a ground zero effect in pop and rock – Little Feat were one of the hippest bands on the planet. Co-founded by LA singer, songwriter, guitarist and producer, Lowell George – who had played in Frank Zappa’s Mothers Of Invention – they debuted as a blues-influenced, Rolling Stones-esque, quartet for Warner Bros in 1971 with their self-titled debut. But a reshuffle of personnel in 1973 saw them morph into a flexible six-piece band whose music reflected a melting pot of influences: assimilating rock, blues, pop, soul, country and even jazz into a homogeneous whole. It was during the mid-’70s that the band graduated from being the darling of the critics and a cult sensation to a mainstream attraction with hit albums and stadium gigs but in 1979, main man Lowell George suffered a fatal heart attack at the age of thirty-four, which effectively laid the band to rest. But in 1988, keyboardist Bill Payne resurrected the group, which is going strong today forty-four years after their inception and still prove a big live draw in the States and Europe.

In 2000, interest in the group was revived when Rhino released the now-deleted 4-CD box set, ‘Hot Cakes & Outtakes,’ which superbly chronicled the band’s career and contained many previously unissued cuts. Since then, however, it’s been relatively quiet in terms of resuscitating Little Feat’s back catalogue, which is hugely disappointing given the fact that we live in the age of the collector-oriented, deluxe, remastered reissue packed with bonus tracks. Perhaps it’s due to the fact that Little Feat’s stock seems to have lost value over the years and that they no longer seem relevant (ironically, they’ve gone back to being perceived as a cult band again). They do, however, possess a loyal, hardcore following though it probably consists of long-time aficionados well into middle-age rather than recently-converted younger listeners. While some Feat fans will welcome this 13-CD retrospective many more will very probably be critical, highlighting the conspicuous absence of any kind of booklet and/or liner notes, and, arguably most important of all, rueing the fact that none of the constituent albums have been remastered for the occasion. Having said that, sonically, the albums sound better than the group’s original CD reissues from the late-’80s and early ’90s.

On the plus side – especially for those that missed out on ‘Hot Cakes & Outtakes,’ which now goes for big sums of money on Amazon Marketplace – this box set contains a bonus disc packed with 24 of the 25 previously unissued tracks that could originally be found on that retrospective. The aforementioned deficiencies aside, the box set is certainly well-packaged with each of the band’s twelve albums attired in mini replica LP sleeves. The price tag – around £34 on Amazon, which works out at around £2.60 per CD – is also an incentive. The biggest incentive of all, though, is the music, which affirms that this idiosyncratic, category-defying band were unique, especially in the way that they could distil a panoply of influences into a coherent sound and style.

The key album on the set in undoubtedly 1973’s ‘Dixie Chicken,’ the group’s game-changing third album and the first to be produced by Lowell George (it was also the second of their albums to be attired in a distinctive and eye-catching Neon Park-designed cover). With the crucial input of new members, percussionist Sam Clayton – the brother of soul singer Merry Clayton – guitarist Paul Barrere, and bassist Kenny Gradney, plus the addition of gospel-inflected female backing vocals, the band’s sound drew heavily on New Orleans funk and soul. The LP’s title cut features Bill Payne’s barrelhouse piano rolls over Kenny Gradney’s sinewy bass line with searing slide guitar fills from Lowell George, whose expressive, melismatic-style vocal distinguishes him as one of the finest blue-eyed soul men of the ’70s. ‘Two Trains’ is a great slice of gospel-funk and ‘Roll Um Easy’ is a bare-boned soulful country-blues while ‘Fat Man In the Bathtub’ is a humour-flecked Big Easy groove. There’s also a sensational, transcendent version of Allen Toussaint’s ‘On Your Way Down.’

1974’s ‘Feats Don’t Fail Me Now’ was a similarly eclectic sonic melange that melded rock with blues, boogie, funk and soul – an example of the latter is the brilliant ‘Spanish Moon,’ which has a pre-Earth Wind & Fire Fred White on drums and finds George’s soul-drenched vocals counterpointed by the Tower Of Power horns. 1975’s ‘The Last Record Album’ was also a key LP in that it witnessed a more democratic approach in terms of the group’s songwriting and marked a significant decline in Lowell George’s contribution, which continued with 1977’s transitional LP, ‘Time Loves A Hero.’ That particular album found the band moving into the realms of jazz-rock, evidenced by the lengthy fusion-esque instrumental, ‘Day At Dog Races.’ The 1978 double album, ‘Waiting For Columbus,’ captured the band firing on all cylinders live in the USA complete with the Tower Of Power horns. The version used here is the 2008 remastered expanded reissue – the only Little Feat album to be remastered by Rhino to date – and presents an impressive picture of the band at the peak of its powers.

Lowell George, a perfectionist workaholic who played on numerous sessions for other people’s albums – including The Meters, Etta James, Robert Palmer, Jimmy Webb, Bonnie Raitt, and the UK’s Linda Lewis – died suddenly from a heart attack in 1979, the result of a hedonistic, drug-fuelled rock ‘n’ roll lifestyle. The band had been working on a new album when he died, which was completed and released as ‘Down On The Farm.’ Though not as strong as some of the band’s mid-’70s releases, it’s a solid if flawed effort and seemingly capped the band’s career. Two years later, Warner Bros released a double-LP retrospective, ‘Hoy-Hoy!,’ that featured a lot of previously unreleased material, and a couple of new cuts, among them, the Bill Payne-penned ‘Gringo.’ Payne, in fact, controversially resuscitated the band seven years later and they returned with two LPs for Warner Bros, 1988’s ‘Let It Roll,’ and 1990’s ‘Representing The Mambo.’ Both were solid but unspectacular affairs with new recruit, Craig Fuller, substituting for the irreplaceable Lowell George on vocals. After that, the band’s tenure with Warner Bros came to an end and they’ve since recorded for a variety of labels.

The final disc in this box set is ‘Outtakes From Hotcakes.’ There’s a whopping twenty-four cuts, the best of which is a lovely Lowell George-scribed country-troubadour-style ballad called ‘Doriville,’ from the sessions for the band’s second LP, ‘Sailin’ Shoes,’ that sounds like a companion piece to his classic song, ‘Willin’,’ (which appeared, in different incarnations, on Little Feat’s first two albums and is arguably George’s greatest ever song). George is also in fine form vocally on the Allen Toussaint ballad ‘Brickyard Blues,’ originally cut at the ‘Feats Don’t Fail Me Now’ sessions.  There are also several alternate versions of familiar Feat tunes but what makes them listenable is that many of them evince radically different arrangements – like an uptempo rendering of the ballad, ‘Roll Um Easy,’ which George recorded for his 1978 solo album ‘Thanks, I’ll Eat Here’  though it didn’t make the final cut. The presence of that particular track – and another solo George tune, ‘China White,’ which appears on ‘Hoy-Hoy!’ – makes you wonder why Rhino didn’t include his solitary solo album in the box set as well.

Despite its several shortcomings, ‘Rad Gumbo’ is a worthy set because it brings a chronically underappreciated band back into the spotlight again. Certainly, contextual liner notes would have greatly enhanced the package, just as remastering would have given greater depth, nuance and detail to albums whose master tapes haven’t been taken out of the boxes in the Warner archives for over twenty years. Even so, for an inveterate Feat fanatic like me, the chance to appraise this great America band’s back catalogue again in a single sitting has proved an immeasurably pleasurable occupation – and more importantly, it’s a collection that reaffirms for this writer the maverick genius, songwriting brilliance and stellar musicianship of one Lowell George.