LITTLE ANTHONY AND THE IMPERIALS; Goin’ Out Of My Head/Payin’ Our Dues (BGO) 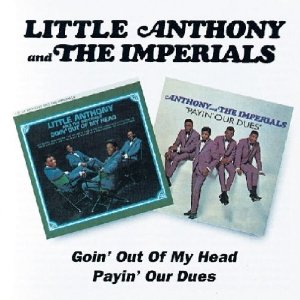 Brooklyn’s Little Anthony And The Imperials are best known for their mid 60s sweet soul ballads ‘Hurt So Bad’ and ‘Goin Out Of My Head’ though on the Northern scene they’re revered for the much more energized ‘Better Use Your Head’. For all kinds of reasons the group have been badly served by the reissue labels, but here there’s a chance to catch up on what most critics consider their two best LPs with this re-promoted BGO “twofer”. The collection pairs 1965’s DCP album ‘Goin’ Out Of My Head’ with ’66’s ‘Payin Our Dues’ which was released on Veep. The group’s mentor Teddy Randazzo helmed both sets and the style he perfected for the group bridged perfectly the doo-wop flavours with which the foursome had started their careers and the new, emerging sweet symphonic soul that was to hit its peak with Thom Bell.

‘Goin’ Out Of My Head’ is essentially a collection of lush, uptown ballads which allow Little Anthony (Gourdine) to show off his mastery of vocal drama – his forte was to wring the most from the sentimental lyrics by over-articulating in the manner of Johnny Mathis … though there’s always a soulful undertow grounding the work. The LP’s title track is timeless and ‘Hurt So Bad’ shows why that too has become something of a soul standard. Of the other original songs, ‘Reputation’ has a feel of Gamble/Huff’s ‘United’ while amongst the covers there’s great treatments of ‘What A Difference A Day Made’ and ‘Hurt’.

For ‘Payin’ Our Dues’, Randazzo took the group to Veep Records but he kept the musical formula much the same. The LP boasts more superb, lush balladry with ‘It’s Not The Same’ echoing the template of ‘Goin’ Out Of My Head’. There’s also two great up tempo moments –the aforementioned ‘Better Use Your Head’ and the equally uplifting ‘Gonna Fix You Good’ which itself became something of a Northern soul classic and it’s no surprise that both owe something to the Motown sound that was dominating the business in 1966.

Both albums are now over 45 years old and are very much time pieces but they stand as a great testament to a sadly underrated group.