LITTLE ANTHONY & THE IMPERIALS; On A New Street/Hold On (Soul Music Records) 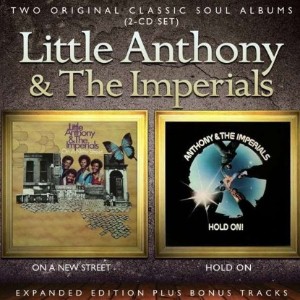 Little Anthony and the Imperials are rightly best remembered for their classic late 50s and mid 60s hits – ‘Tears On My Pillow’, ‘Goin’ Out Of My Head’, ‘I’m On The Outside Lookin’ In’ and of course the Northern perennial ‘Better Use Your Head’. After those golden days, the Anthony Gourdine-led group enjoyed something of an itinerant career, working for labels like Veep, Janus and Avco and that last label is the source of this quite lovely twofer reissue from Soul Music Records. The group signed to the Avco label in 1973 and there they recorded two full albums – ‘On A New Street’ and ‘Hold On!’ (For that latter, by the way, Anthony dropped the “Little” tag). Here the LPs get their first ever CD reissue and to make the set even more collectable, remember, ‘Hold On!’ was deleted after just a couple of weeks – any kind of copy is (up to now, at least) very, very hard to find.

For their Avco debut label bosses Hugo and Luigi assigned Thom Bell as producer – he was hotter than hot at the time, but, in quite a touching way, Bell decided to allow Anthony’s old mentor and his (Bell’s)) arranger/producer role model, Teddy Randazzo, to co-produce. In the end the pair decided to work on one side of the album each though sonically it made little difference to the outcome of ‘On A New Street’. The 11 tracker ended up a classic mid 70s Philly soul artefact – lush, smooth and sophisticated. Listen up in particular to the lovely ‘The Loneliest House On The Block’.

For the second album, ‘Hold On!’, Tony Bell and Phil Hurtt were brought in to arrange and produce but it made little difference to the sound. The pair were steeped in Philly tradition and the 9 tracker is another classic of the genre. There’s a definite Spinners feel to the music – especially on the single ‘Hold On Just A Little Bit Longer’ and maybe that’s the reason why the two LPs were ultimately unsuccessful. There was a glut of the same sweet soul out there in the mid 70s and buyers could afford to be selective and without the muscle of a big backer, Avco couldn’t promote to the same level as say Atlantic and PIR.

That though doesn’t make the music on the albums any less worthwhile. For fans of sweet, harmony groups this collection is unmissable.