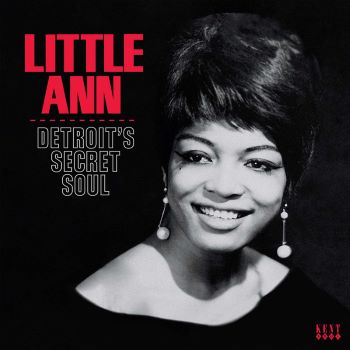 Little Ann (Bridgeforth) is a proper cult soul icon. Born in 1945 in Chicago, she died way too young in 2004 and in a short music career (she spent most of her working life in employment with Chrysler motors in Detroit) she released one official single… 1968’s ‘Going Down A One-Way Street (The Wrong Way)’. It was issued on the legendary Detroit Ric Tic label – almost enough to guarantee cult status. But then in the late 70s/early 80s a coterie of ego-fuelled Northern DJs discovered an acetate record and to keep it to themselves (keeping the faith boys?) they played it out, covered up, as ‘When He’s Not Around’ by a mysterious “Rose Valentine”. It was (indeed is) a gorgeous, classic Detroit soul side and when it was finally “uncovered” it was found to be called ‘What Should I Do’ and that the enigmatic “Ms Valentine” was actually Little Ann; her reputation was subsequently sealed. Not quite too late for her – despite having left the business years earlier. In 1999 she was brought over to the UK to headline a Northern soul event at Cleethorpes. Bizarre? Well yes, a little. Here we had a shy 50 something Chrysler office worker lauded and applauded at a soul weekender in a breezy, dilapidated Lincolnshire seaside resort, singing songs she’d last heard (never mind sung) some 30 years earlier. “The Strange World of Northern Soul”? Not half!

Over the years UK label Ace/Kent unearthed more Little Ann tracks – chiefly through their links with top Detroit muso Dave Hamilton who’d been Ann’s mentor for a short period. The stuff they released on Ann was snapped up by Northern and Detroit soul collectors and now to complete the story, Kent have just released this 25-track retrospective of all of Ann’s Detroit output. However, to add to the confusion, 9 of the tracks are instrumentals. Credited to the Dave Hamilton Orchestra, they are the backing tracks to nine of the featured Little Ann vocals, including the Detroit-defining classic ‘Lean Lanky Daddy’ (with its shades of Edwin Starr’s ‘Agent 00 Soul’) the sweet and lovely ‘The Smile On Your Face’, the moody ‘Deep Shadows’ and, of course, ‘What Should I Do’ which comes in two vocal versions.

The complex, detail and trivia packed sleeve notes explain almost everything you need to know about Little Ann, the provenance of her music and its evolution to cult status. Anoraks and Detroit collectors will think they’re in heaven with it all and if you’re not in that number, the music is still magical and by dipping in you might just get to understand a little about the bizarre often strange world of proper Northern soul. Can’t guarantee that though… I’m often left mystified and I was there… honest!