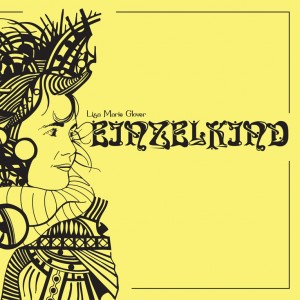 Lisa Marie Glover is a singer/songwriter who works in and around the North of England. She became hooked by music at an early age and is brave enough to admit that it was Belinda Carlisle who originally worked the magic! Since then her tastes have matured just a little as she reveals that her influences are/were people like Nina Simone, Joni Mitchell and Stevie Wonder. In her teens she embarked on a busking odyssey that took her to all kinds of exotic places – Barcelona, Cambodia, Thailand, Buenos Aries and … er, Stockport! And it’s from that Northern base that she’s just launched this lovely, enigmatic ten tracker – ‘Einzelkind’ – which, I’m more than reliably informed is German for ‘only child’. Why? Well, I can only surmise that Lisa is an only child and that the album involves an element of autobiography from that perspective.

If that’s the case then the opening sequence of songs reveal a pretty miserable existence. The first five songs are potential classics of that much-maligned genre, introspective bedsit blues. Mind you with titles like ‘Lost Your Way’, ‘Self Destruct’ and ‘Grey’ you probably wouldn’t expect anything too different… certainly nothing too cheerful. Throughout Lisa sings sweetly, accompanied chiefly by her own simple guitar style. Then, cleverly, just when you feel it’s wrist-slitting time, things take a turn for the better as ‘Mad Mary’ ushers in a brightness and brashness that till then has been lacking. It’s a clever, catchy tune – but bettered by the one that follows – ‘Calculator’. This one is lovely. It boasts a vibrant tune, sweet harmonies on the chorus, great changes and clever, knowing lyrics based around the calculator/buttons/ multiply idea. It’s a very strong cut and if I had any influence I’d recommend it to Radio 2 right away. It would be perfect for the Ken Bruce brigade.

Elsewhere, ‘Please’ is folksy, ‘Simple Dreams’ is as dreamlike as the title suggests while on the closer, ‘Wasting Time’ we’re back to bedsit land. This time, though, the song has real impact and you can almost smell and taste the stagnant ennui of student-style digs via lyrics like “I hate this house, I hate this cold, I hate the mouldy window sills”. The cut’s enlivened by some Dylan-esque harmonica (though the sleeve notes suggest it’s a melodica).

‘Einzelkind’ is a subtle, out-of-focus set that combines elements of folk and jazz. Lyrically, it’s thought provoking and properly adult without being too arty farty clever. You can find out more @ www.lisamarieglover.co.uk