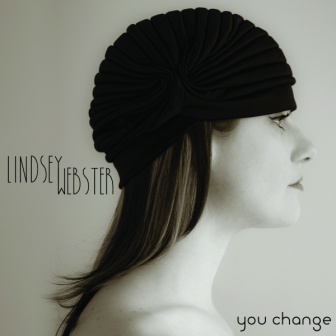 Lindsey Webster grew up in Woodstock, New York and maybe because of the locale’s history her school placed huge emphasis of music and the arts. At school she mastered the cello and to further her craft she re-located to New York City, studying at LaGuardia School for the Music, Art & Performing Arts where she soon made the significant choice to focus on singing rather than playing

By 2009, Lindsey felt confident enough to perform live and in tandem with her partner, Keith Slattery, she worked the clubs, bars and small theatres in and around NYC. An eponymous album followed and it quickly scooped several indie music awards, bringing her a deal with Atlanta Records and eventually this wonderful ten track sophomore set.

‘You Change’ is already winning great reviews in the independent soul press with many reviewers championing the set as one of 2015’s very best… and this reviewer wouldn’t disagree. The album is beautifully crafted. The overall soundscape is laid back with a Sunday morning easy vibe. The tone is sophisticated without being flashy; sincere without being sentimental; and each of the ten self-penned songs perfectly suit Lindsey’s remarkable voice. Some reviewers have compared Lindsey’s vocals to Mariah Carey, Sade, even Anita Baker. Sade … definitely…. Ms Baker … maybe… Ms Carey… no. To deliver, Lindsey Webster doesn’t need to resort to melissma, power and pyrotechnics. Rather, she focuses on the simple and if drawn to make comparisons I’d be tempted to suggest Norah Jones, Carole King… even James Taylor while on some tracks I can hear dear old Dusty Springfield.

Hear that Dusty feeling on the dramatic ballad, ‘Bleed’. With just a simple piano accompaniment. Lindsey’s vocal is every bit as heart-tugging as Dusty’s often was (as on ‘I Close My Eyes And Count To Ten’ for instance). ‘I Found You’ is another real highlight. Light and gentle, it’s almost hushed and there’s real chemistry between Keith Slattery’s piano and Lindsey’s vocal. There’s more lovely piano/vocal interplay on the LP’s title track. Like everything here the song boasts a great melody, it’s beautifully song, the playing is sympathetic and the arrangement cements the emotional connection. What’s not to like?