LINDSEY WEBSTER; Back To Your Heart (Shanachie) 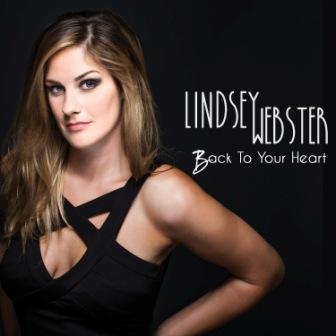 Last year we awarded one of our rare five star reviews to Lindsey Webster’s long player, ‘You Change’. In an era of stereotypical soul, the young singer from upstate New York offered something new. Sure, you could hear the influence of people like Anita Baker, Sade, even dear old Dusty Springfield, but Lindsey “did soul” in her own special way and she continues to do just that on this, her new release on Shanachie records.

The 11 tracker is already receiving glowing reviews from the soul media and key cuts are being regularly rotated on all the best soul and jazz stations, so a review here might seem a little redundant. All we can do is to endorse what has already been said. ‘Back To Your Heart’ is an excellent modern soul album and as for those programmers picking “key cuts”… I’d want to know how they manage that. Each track here, you see, has lots to offer; consequently cherry-picking is nigh on impossible. Let’s then just point you to some of the excellence herein.

Like her first two long players, ‘Back To Your Heart’ has been produced by Lindsey’s husband and keyboardist, Keith Slattery and between them (and in consultation with Shanachie execs) they chose ‘Back To Your Heart’ as the album’s title cut. It’s easy to hear why. It’s a hook laden modern soul shuffle with a light jazz garnish and the sweet melody allows Lindsey to show just what she can achieve. There’s more of the same on ‘You Know Well’ and ‘Next To Me’. ‘Where Do You Want To Go’ and ‘Those Three Words’ are sweet ballads and it’s a mark of the skill of Webster/Slattery that they manage to weave something new from “those three words”. Then if you want something a little more up-beat and energized try ‘Ain’t It Funny’. The Webster/Slattery take on polite jazz/funk. That cut is about as hectic as the album goes.

The success of ‘You Change’ has meant that Lindsey can entice some big names to guest with her and here sax doyen, Kirk Whalum comes in to enhance ‘One At A Time’. The song is dear to Webster’s heart. It’s her thoughts on the Black Lives Matter campaign. Lyrically it’s a subtle plea to end the cyclical police violence that’s fuelled by ignorance and hate; musically the cut’s a jazzy meander… almost a duet between Lindsey’s vocal and Whalum’s sax. Maybe closer to Lindsey’s heart is ‘Somehow’. This one is a homage to the singer’s late mother and interestingly it’s not a sad song per se. In places it’s feisty and tough … a sincere tribute to her mother’s spirit. Listen hard, and towards the end you can hear Lindsey whisper “I love you, mom”. Yes, an intensely personal song but like all great soul it’s offers a contextual universality. I can identify with it; you will too… and we can say that about every song here. Proper soul music indeed! Go to our interview section for an exclusive interview with Lindsey.