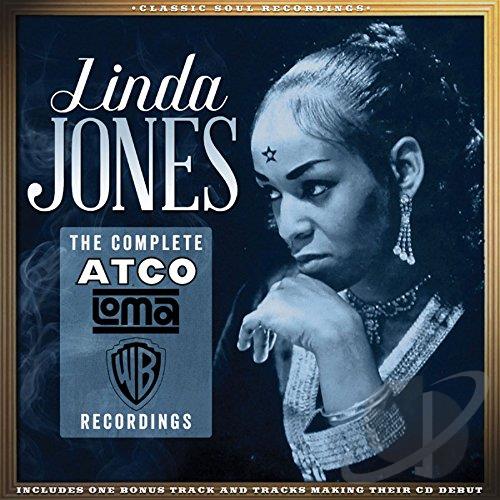 Big-voiced cult soul siren, Linda Jones, died tragically young – she was just 27 when diabetes complications robbed her of her life in March 1972. Fortunately for soul fans, though, the New Jersey singer has left a rich, if small, legacy of recorded music behind for posterity to enjoy. This superlative compilation collects together the sides that Jones recorded for the Atco, Loma  – a short-lived subsidiary imprint of Warner Bros – and Warner Bros labels in the mid-to-late 1960s.

Jones’ voice with its dramatic, stentorian tone and rich, liquid torrent of gospel melisma  (she began her career singing in church in a family gospel group) is a magnificent instrument though its histrionic quality might not be to everyone’s taste. Having said that, no one can deny the power of her voice and this compilation vividly illustrates that whether she was pouring her heart out into a romantic ballad (‘Hypnotised’)  or admonishing a fickle, cheating paramour on a stomping up-tempo number aimed at the dance floor (‘You Take It’), she always gave 100% in terms of  commitment and made the listener believe every word that she sang. But Jones was much more than a mere soul shouter – sure, she could wail with the best of them but she could also tell a story with deep sensitivity and a nuanced-delivery, as the wistful and hopelessly romantic number, ‘If Only (We Had Met Sooner)’ and ‘The Things I’ve Been Through (Loving You)’ both testify.

The 21 tracks on this set include the complete ‘Hypnotised’ album  that she recorded for Loma (consisting of eleven tracks and whose title track was Jones’ biggest US R&B smash) plus an assortment of non-albums singles and B-sides (including tracks new to CD). Besides the songs already mentioned, the brilliant Motown-esque ‘A Last Minute Miracle’ and ‘My Heart Needs A Break’ are worth singling out as is the brisk Northern Soul dancer, ‘I Can’t Stand It.’ Interestingly, Jones’ producer and mentor, George Kerr, shares his memories of working with Linda Jones in the set’s liner notes, which adds to the appreciation of the music. A fabulous compilation, this – and one that every serious soul historian should get acquainted with post haste.