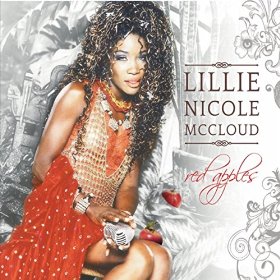 Soulsters of a certain vintage might well remember Lillie Nicole McCloud from her 2002 hit ‘Don’t You Want My Love’, though avid talent show watchers will know her from her performances on American X Factor. She was a mainstay in the 2013 series and ended up a creditable 8th, proving that age (Nicole’s proud to admit to being 54) is no barrier to success.

Determined to continue the momentum. Nicole cut some new tunes and issued a new album ‘Red Apples’ which sort of slipped through the soul radar. New Year, new hopes… Ms. Mc. has decided to repromote the set and has added some of her old tunes to beef the album up to a massive 17 tracks.

Highlights on the album are the big covers – notably a femme-twist on the Temptations’ ‘Treat Her Like A Lady’ and a cover of Ce Ce Winans’ ‘Alabaster Box’… the song that wowed the US X Factor judges. A take on Timmy Thomas’ ‘New York Eyes’ is worth investigating too. Three great songs, of course, and I guess their familiarity gives them a leg up in the album standout stakes!

Many of the other songs are undistinguished and lack focus… like the tribute to Michael Jackson, ‘We Lost A King’ –which is more AOR than modern soul. The ballads tend to meander, some of the mid-tempo items feature throw-away raps and the dance tracks veer into house territory but don’t sound totally convincing.

The problem with ‘Red Apples’ is that here more is actually less. There is just too much music here… and a lot of it is unremarkable, However I did notice that copies of this album are now changing hands at £50…. so what do I know?